Laura Ingraham Interviews Dave Brat on the Occasion of His Victory 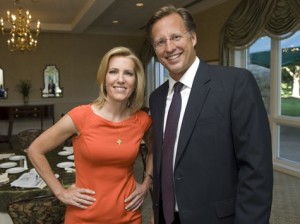 On Wednesday, radio talker Laura Ingraham celebrated the stunning victory of Dave Brat over Majority Leader Eric Cantor. She noted that the national Tea Party organizations like Tea Party Patriots (where Jenny Beth Martin makes $500K) have become a new establishment and wrote Brat off. Local Tea Party folks pitched in to help with the campaign, but no money was forthcoming from the big organizations.

Laura discussed Dave Brat’s appeal — his warmth, courage and communications skills. She compared him to Sen Jeff Sessions as educating his constituents during the campaign on important issues like the harm for working people contained in amnesty. He is an economics professor, so he has a lot of practice in educating.

Brat called in for the interview and praised all the people who worked for his election, making the phone calls and knocking on doors. He said he ran as a Republican on traditional principles of fiscal responsibility, Constitutional governance, the rule of law, peace through strength and US sovereignty.

Listen to the interview on Laura Ingraham.com.

“There are parts of this country where if Laura Ingraham, Ann Coulter and Mark Levin are on the radio supporting you, that’s worth a lot! In fact if somebody said would you rather have Freedomworks behind you or would you rather have any of those three radio talk show hosts in there plugging for you day by day, I think I know what my choice would be.”

The three people Hume mentioned are true warriors against amnesty. Coulter in particular will routinely bring up amnesty when the subject is something that appears unconnected but isn’t. By comparison, Rush Limbaugh only discusses illegal immigration when it’s unavoidable.

Dave Brat has a YouTube channel. The following press conference was posted on May 28 and focuses on immigration, particularly Cantor’s support for open borders and cheap labor for corporations.