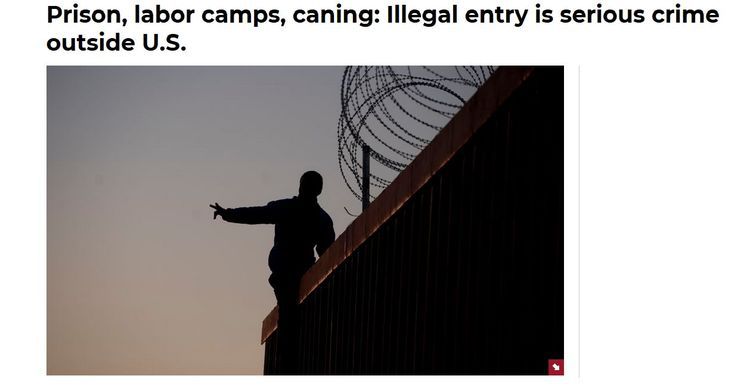 Other Countries Put Illegal Entrants In Prisons And Labor Camps 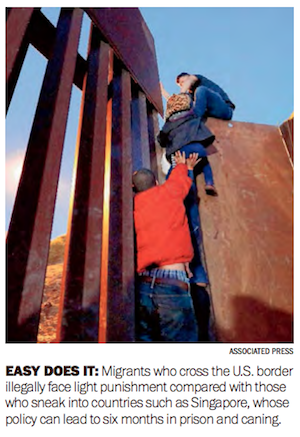 Tuesday’s Washington Times front-paged an article reminding us that punishment is an effective strategy to decrease bad behavior. Some other nations are harsh in their response to illegal immigration, while the United States offers a friendly welcome to invaders. A May report on the Rio Grande from Fox News’s Raymond Arroyo found Border Patrol agents acting more like social workers than sovereignty enforcers, helping aliens reach the American side.

As Senator Charles Grassley remarked regarding the 1986 amnesty for millions of lawbreakers,  “You know what I found out? If you reward illegality, you get more of it.”

Jumping the border in Singapore is punishable by six months in prison — and not less than three strokes with a cane.

In Russia, it can earn you up to two years in a prison labor camp.

Pakistan goes as high as 10 years in prison, while India allows for up to eight years behind bars for those who sneak across its boundaries.

It’s a far cry from the U.S., where illegal entry is a misdemeanor, with a maximum of six months in jail. In reality, most of those who are prosecuted — and only about 1 in 5 border jumpers are — are sentenced to time served and are out within days.

The U.S. has one of the world’s weaker laws for illegal entry, according to the data in a study by the Library of Congress, which surveyed statutes in more than 160 nations and released its findings amid a heated debate over whether America’s penalties are too stiff.

The debate is being driven by the Democratic presidential candidates, some of whom have argued that the U.S. should eliminate the criminal penalty altogether. The data shows that’s a bad idea, said Jessica Vaughan, policy studies director at the Center for Immigration Studies, which advocates for stricter immigration controls.

“Illegal immigration is a crime in almost every nation because regulating immigration is key to maintaining national sovereignty and identity, and citizens and leaders of every nation place a high value on that,” Ms. Vaughan said. “There are good reasons why almost every other country in the world has similar criminal penalties, and we shouldn’t flog people over it, but we do need the tools of arrest and detention to deal with the problem.”

In the U.S., illegal entry is criminalized under 8 US Code Section 1325, “improper entry by alien,” which calls for a fine or imprisonment of up to six months, or both. Doing it a second time can earn a two-year sentence.

That is in addition to the civil penalty for being in the country without authorization, for which the result is deportation.

Those policies are in line with laws in Canada and the United Kingdom, which also impose six-month maximum sentences on illegal entry, but, like the U.S., usually just deport border jumpers instead. (Continues)