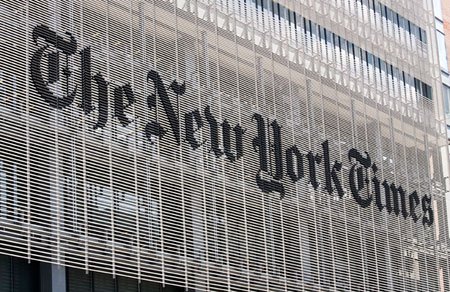 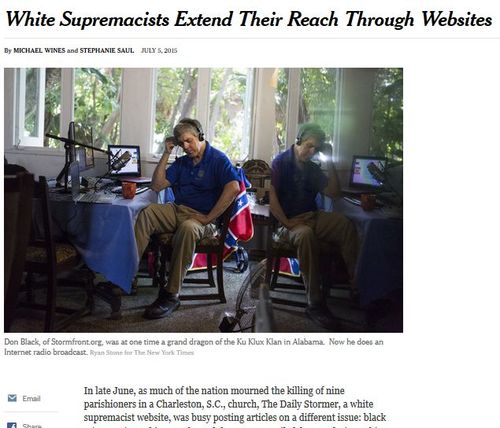 Burying the lede? In a front-page article about the danger of “White Supremacist” websites in the wake of Dylann Roof massacre at Emanuel African Methodist Episcopal Church, the New York Times reports an extraordinary fact as a mere digression: investigators believe that no online “white supremacists” either “encouraged or assisted in the deadly shootings.” [White Supremacists Extend Their Reach Through Websites, by Michael Wines & Stephanie Saul, July 5, 2015].

This is becoming standard Main Stream Media practice when faced with Narrative Collapse: report the inconvenient fact, then carry on regardless as if it didn’t exist.

Thus while a few other news articles mention the lack of any “white supremacists” encouraging him, and the NYT also briefly mentioned it in a previous article about Roof’s connections to online “white supremacy” [Charleston Suspect Was in Contact With Supremacists, Officials Say, by Michael D. Schmidt, July 3, 2015], I could not find a single article that devoted more than one sentence to this key fact. 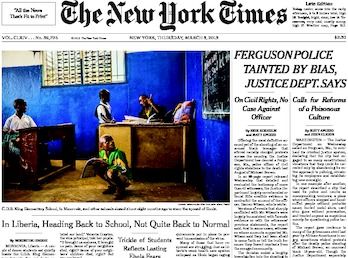 This is not new for the New York Times or the MSM in general. For example, the day Eric Holder’s Justice Department cleared Darren Wilson of any wrongdoing in the shooting of Michael Brown, the New York Times’ lead headline was Ferguson Police Tainted by Bias, Justice Dept Says [By Matt Apuzzo And John Eligon, March 4, 2015] with a subhead for a shorter article On Civil Rights, No Case Against Officer [By Erik Eckholm And Matt Apuzzo, March 4, 2015]taking second billing.

The NYT also ran a lead editorial on the Justice Department’s report, which devoted only 26 of its 564 words acknowledging that the Justice Department’s “investigation did not support federal civil rights charges against Darren Wilson, the officer who shot and killed Mr. Brown,” instead changing the narrative to argue that the riots, which NYT and other MSM false reporting encouraged, were only “partly about his death” and instead were also about a “lamentable history of abuse suffered by African-American citizens” [A Chilling Portrait of Ferguson, March 4, 2015]

Indeed, it’s now standard journalistic practice to bury a lede that exonerates alleged racists of specific wrongdoing that the MSM has been harping on in a stories about the larger problems of racism. Rather than issue a mea culpa for blaming Roof’s on misdeeds the Council of Conservative Citizens and other right wing websites—whose actual offense is to accurately report black-on-white crime that the MSM routinely suppresses—NYT simply notes their non-involvement in a thruway aside, saying that Roof “clearly embraced their worldview.”

But in fact the NYT itself reports a major difference in “worldview:” Roof’s was frustrated with the “movement’s disavowal of violence,” and made this clear in his manifesto, which concluded

We have no skinheads, no real KKK, no one doing anything but talking on the Internet. Well, someone has to have the bravery to take it to the real world, and I guess that has to be me.

In a previous column, I compared Roof to Family Research Center shooter Floyd Corkins. But Roof’s connection is really more tenuous. The Southern Policy Law Center ($PLC to VDARE.com) specifically listed the Family Research Center as a “Hate Group,” but there is no mention of any “white supremacist” website saying anything negative about Emanuel African Methodist Episcopal Church.

Moreover, while the majority of the Left who whipped up anti-police hatred disavowed violence, there were many who did encourage violence against policemen.

In contrast, the New York Times’ Wines and Saul could not find a single instance of even an anonymous commenter advocating violence or defending Roof’s actions.

Instead, W&S story focused on three websites: the Daily Stormer, an openly neo-Nazi website; Stormfront, the largest white nationalist message board on the internet and its founder Don Black; and the National Policy Institute, a think tank headed by Richard B. Spencer (which VDARE.com Editor Peter Brimelow has addressed). Oddly, though W&S briefly mention American Renaissance, they apparently did not interview Jared Taylor, despite that fact that he served as the spokesman for the Council of Conservative Citizens in the wake of Charleston.

Although the bar is set low, Wines and Saul did a bit more than point-and-splutter at the views that Stormfront’s Black and NPI’s Spencer espoused. Black is quoting giving some matter-of-fact information on the size of his website and describing why he rejected more radical organizations like the Klan. Spencer gives his views on American influence across the world and his dream of a European Revival (which W&S maliciously misquoted as an “Aryan Revival”) in America. [Responding to the New York Times, by Richard B. Spencer, Radix Journal, July 6, 2015].

Yet the purpose of the W&S article was not to understand Spencer or any other “white supremacists,” nor was it to understand Roof. Rather as Spencer says:

The Times article is thus an effort to “understand” Roof by linking him, however irrationally and tangentially, to writers, thinkers, and activists whom the Times already disliked.”

The NYT goes further and used the lack of encouragement from any other “white supremacist” to vindicate the Department of Homeland Security’s maligned 2009 report on right wing extremists, which asserted: “White supremacist lone wolves pose the most significant domestic terrorist threat.” [Right Extremism: Current Economic and Political Climate Fueling Resurgence in Radicalization and Recruitment, April 7, 2009]

Yet even if this were true, there is little evidence that cracking down on “white supremacist websites” would have any impact.

Gauging [the white supremacy movement’s] impact on the Charleston murders, he said, is even harder.

“The idea that you could reaffirm someone’s ideology and maybe even sharpen or focus it on a particular target is something these sites are capable of doing,” Mr. Green said.

As for the church shooting suspect, Mr. Roof, “We don’t know whether that was a marker for his violent predispositions or might be the cause of them,” Mr. Green said. “It might be both.”

It may be giving Green [Email him] too much credit to try to untangle these sentences, but the first one appears to be arguing that “white supremacist” websites may make people who agree with them feel more strongly about their beliefs and make some deranged people select targets based on their ideology. I’d be curious to know if Green believes this does not apply to every ideology.

As for Green's concluding thought, if these sites simply attract marginal people who are already likely to commit violence, then their effect in increasing violence would be marginal.

And Green does not seem to explain how a movement, which by the NYT’s own reporting vigorously condemns violence, could cause Roof’s “violent predispositions.”

But in today’s political climate, he doesn’t have to.

Malcolm X is alleged to have said: “The media's the most powerful entity on earth. They have the power to make the innocent guilty and to make the guilty innocent.”

The attempt to tie right-wing websites to Dylann Roof’s massacre even while acknowledging he had no ties to them and opposed their disavowal of violence is just the latest example of the media “making the innocent guilty.”