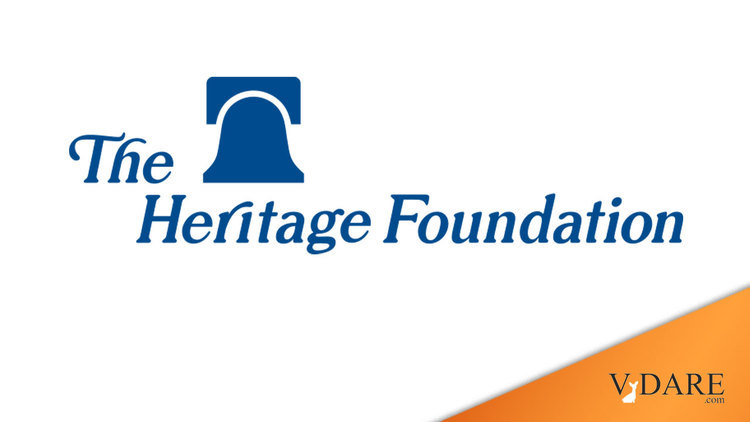 The story so far (in the wee hours of Thursday morning). Following the release of a report by the Heritage Foundation arguing that the Rubio-Schumer immigration bill will cost the nation $6.3 trillion, the Slave Power set their dwarf miners to digging.

They soon found gold. One of the co-authors of the study is twentysomething Jason Richwine, a Heritage analyst. Not just an analyst, but a quantitative analyst: “Heritage’s senior policy analyst in empirical studies.”

Uh-oh. This Richwine guy deals with numbers, evidence, and facts—radioactive materials in a nation under strong ideological control.

To sift truth from error at best requires an effort; where there is no great advantage for the former, the latter often prevails, as errors are infinite, simple, and attractive—and many a fancy lends support to established position—while truth is one and often stern. The imperial order, itself irrational and hence distrusting reason, excels in credulity and superstition.

After a few days’ digging the Nibelungs turned up Richwine’s Ph.D. thesis from Harvard University, title: “IQ and Immigration Policy.” The mother lode! (You can download it from here.)

The Washington Post ran a gleeful story on the find under the headline “Heritage study co-author opposed letting in immigrants with low IQs.” [By Dylan Matthews, May 8, 2013]They note that:

Richwine’s dissertation asserts that there are deep-set differentials in intelligence between races.

Eek! A witch! But how to link this evil person (for such he plainly is) with the Heritage report costing Rubio-Schumer? Easy.

First, the Post notes that Richwine’s thesis argues for selection of immigrants by IQ. (“I believe there is a strong case for IQ selection”—page 133 of the thesis.) However:

He does caution against referring to it as IQ-based selection, saying that using the term “skill-based” would “blunt the negative reaction.”

See? That Heritage report on the Rubio-Schumer bill is nothing but a conduit for the twisted white supremacist fantasies of a racist bigot!

(I note in passing that the Heritage position favoring increases in high-skilled immigration is at odds with VDARE.com’s position, and also with the data.)

Post columnist Jennifer Rubin, on secondment from Conservatism, Inc. to offer some pretense of “balance” at the Post, hastened to join the lynch mob. “It undermines the cause of all immigration opponents to have their prized work authored by such a character,” she wrote, reading Richwine out of respectable society.

It’s an unpleasant reminder that sincere opponents of reform should distance themselves from the collection of extremists and bigots who populate certain anti-immigrant groups.[ Heritage stumbles, again and again, May 8, 2013]

She then brings in Jennifer S. Korn for a quote. Ms. Korn was Secretary for Hispandering in the George W. Bush White House. (Note that her bio page on the Hispanic Leadership Network website retails the old lie about Bush getting 44 percent of the Hispanic vote in 2004. These people live in lies like maggots in rotten meat.)

What does Ms. Korn have to tell us?

Richwine’s comments are bigoted and ignorant. America is a nation of immigrants; to impugn the intelligence of immigrants is to offend each and every American and the foundation of our country.

So you can get a Ph.D. from Harvard by submitting “comments” to the thesis examiners? Who knew?

In fact Richwine’s thesis is of a properly scholarly standard, with twelve pages of references (pp. 147-158) and a wealth of quantitative data from published academic sources.

As to Richwine having “impugned” the intelligence of immigrants: My dictionary defines “impugn” as “cast doubt upon.” Far from casting doubt, Richwine’s thesis seeks to remove doubt by careful quantitative analysis.

Even if you take Ms. Korn’s usage of “impugn” to mean Richwine has stated that immigrants have lower mean IQ than natives, she is wrong. Table 2.2 in the thesis (p. 30) gives an average estimated mean IQ of 105.5 for immigrants from Northeast Asia. Should Mrs. Derbyshire consider herself impugned? (I asked: she doesn’t.) The estimated mean for European immigrants—that’s me!—in that table is 98.0. Am I thereby impugned? I’m reaching for it, trying to feel it, but . . . no, it’s not there.

The comment thread to Jennifer Rubin’s piece is laden with the usual driveling ignorant obscurantist piffle one gets in these cases. “I’m an immigrant and I’m smart!” (Commenter at 5/8/2013 8:42 PM.) Not smart enough to understand the concept of an average, apparently. “Goddard said Jewish immigrants were dumb!” No he didn’t. Fox News . . . the Koch brothers . . . You know how it goes.

The Godwin Quotient (GQ)—percentage length into the comment thread at which one of the words “Nazi” or “Hitler” appears—was 4.88 at 2 a.m.

(Not even trying! Ms. Rubin herself, by way of slandering George Borjas, one of Richwine’s thesis advisers, links to an 849-word column by Hispanic race shill Raoul Lowery Contreras that has “Nazi” at word number three—a sensational GQ of 0.35!)

There is, though, in that comment thread, some good push-back against the nitwits. A shout-out here from me to “Bob017,” whoever he is (I have no idea), for stalwart service. Our own Steve Sailer is in there, too. Magna est veritas et prævalebit—“The truth is great and it will prevail a bit.”

And so another “anti-racist” witch hunt commences. I know how Jason Richwine feels right now: about the same way I felt the weekend of April 7th-8th last year.

The forces of orthodoxy have identified a heretic. They’re marching on his hut with pitchforks and flaming brands. The cry echoes around the internet: “Burn the witch!”

Here’s what you can expect, Jason.

First, you’re not going to come to any physical harm (though your email might get sabotaged). It’s not really personal. The lefties are not after you, though if they mess up your life they will of course feel pleased with themselves. They are after the Heritage Foundation, just as the mob coming after me last year were after National Review.

Second, the monkeys will be duly scared. Expect Heritage to disown you.

It’s not that Heritage people in general are jerks, though of course a few individuals may be. It’s part prudential, part ideological.

The prudential aspect is simply the hard logic of fighting a war—the Cold Civil War—with numerically inferior forces. You have to pick your fights with care, like Joe Johnston retreating up the Peninsula before the Seven Days. Joining battle with the massed forces of Cultural Marxism—the media, schools and colleges, corporations, unions, major religious establishments, government bureaucracies—on behalf of a lone staffer could be suicidal.

From where we stand here on the Dissident Right, Conservatism, Inc., of which the Heritage Foundation is one pillar, looks pretty formidable. As much as we have fun scoffing at them, though, we should remember that they see themselves, accurately, as a beleaguered minority.

And they are not a beleaguered minority of quantitative analysts, unfortunately. I doubt there are many Jason Richwines at the Heritage Foundation. Statistical numeracy is a rare talent, rare enough that you can spend many hours among the inmates of conservative think-tanks without encountering the slightest smidgeon, trace, jot, or tittle of it.

Hence the ideological factor. Absent that coldly empirical, quantitative cast of mind that Jason Richwine admirably displays in his Ph.D. thesis, one is open to infection by feelgood ideological fads. This applies to self-identifying conservatives as much as to liberals; and since the overwhelming ideological authority in our country belongs to the Cultural Marxists, not-very-numerate conservatives are generally infected to some degree.

Thus the underbusthrowing of Jason Richwine by Heritage Foundation, which seems to be already under way as I write, is not only prudential. The immigration romantics and world-saving missionaries who control Conservatism, Inc., and who are no doubt plentiful in the decision-makers at Heritage, will be repelled by Richwine’s thesis, or by the accounts of it they are fed by Cultural Marxist outlets (thanks, guys!)

In dumping Richwine they will feel vaguely that they are performing an act of institutional hygiene, cleansing themselves of the dread taint of racism. That everything he says is true, and buttressed by facts, will count for nothing. “Truth is one and often stern”—too stern for the soft minds of careerist hacks.

See you in the camps, Jason!

John Derbyshire [email him] writes an incredible amount on all sorts of subjects for all kinds of outlets. (This no longer includes National Review, whose editors had some kind of tantrum and fired him. He is the author of We Are Doomed: Reclaiming Conservative Pessimism and several other books. His latest book is From The Dissident Right. His writings are archived at JohnDerbyshire.com.