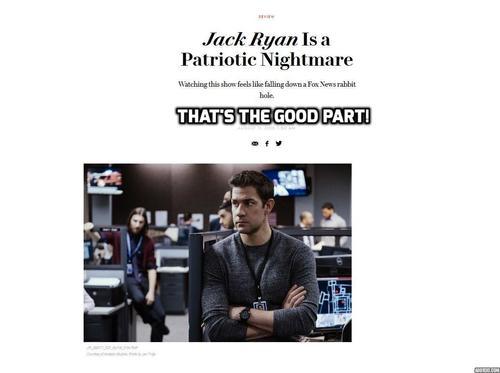 If you want something fun to binge-watch during Christmas vacation, you couldn’t do much better than Jack Ryan, Amazon’s TV series about Tom Clancy’s CIA hero. The series proves what a much wiser friend once told me: Even the most hard-bitten left-wing artist, if truly honest, tells the truth.

Earlier proof of my friend’s point: David Simon, the angry, anti-white Jew who created 2002-2008 TV crime series The Wire. The show was one big Kinsley Gaffe. It depicted blacks in Baltimore as many are: angry, violent, shiftless and murderous.

Yet after riots rocked the City That Bleeds in 2015, and a commenter on Simon’s website suggested it might be time to “revisit” segregation, Simon viciously attacked him. “You f*****g revisit it,” Simon intemperately replied. “I don’t want to live around white people with opinions like the one you just offered.”

Simon had no trouble living around all those murderous blacks, even after he himself had exposed the truth about the city they turned into a Third World warzone.

Simon did what good artists do: in his art—as opposed to his political posturing—he told the truth.

So do the creators of Jack Ryan, Carlton Cuse and Graham Roland. As with Simon’s fury at his cyber-interlocutor, we can imagine all too readily how Ryan’s creators would react to a viewer’s suggestion for a ban on Muslim immigration. Yet despite a number of Politically Correct clichés, the show is, like The Wire, one big Kinsley Gaffe.

It contains the obligatory sex and cursing, and the usual bromidic plotlines. But it also tells the truth about the civilizational enemies creeping west to destroy the gasping Remnant of Christendom.

To dispense with the Politically Correct nonsense first: we have the hard-nosed, loquacious, cigarette-smoking lady cop. Despite multiple divorces and failures at romance, she dispenses unsolicited dating advice for Ryan’s edification while they chase a terror suspect.

We have the budding romance between John Krasinski’s Ryan and a fetching blonde doctor. He beds her with dispatch. But she gets really, really, really, angry when Ryan tells her he works for the State Department—when, indeed, he is a CIA analyst who can be whisked away in the helicopter at any moment.

But she wasn’t all that angry after all. The helicopter exit was pretty cool. All is well after another turn between the sheets.

The hot blonde doctor, of course, can’t just be a run-of-the-mill doctor, as she was in the earlier Jack Ryan film, Harrison Ford vehicle Clear and Present Danger. There the wife—the absolutely stunning Anne Archer (daughter of the equally-stunning Marjorie Lord—was an ophthalmologist at the Wilmer Eye Institute, Johns Hopkins Hospital. But she wasn’t, herself, an anti-terrorist warrior, she was the wife of the protagonist.

The new, improved and perhaps future Mrs. Ryan is an infectious disease specialist who discovers a presumably-dead strain of Ebola that has somehow resurrected. The culprits, of course, are the terrorists. No conventional glaucoma surgery for the reinvented main squeeze. She’s hard on the trail of terrorists in her own way.

The main antagonist is the homophonic, eponymous Suleiman, Suliman being the actor’s surname. French bankers helped caused his dash into the world of terror. They discriminated against the Sorbonne finance whiz when he applied for a job, and the rest as they say, is history.

Well, as the real French in the real world say, maybe if we’d only be nicer to these Muslim interlopers, they wouldn’t set hundreds of thousands of cars every New Year’s Eve.

Those quibbles aside, the program’s Kinsley Gaffes begin, well, at the beginning. Here, we get what is ultimate reason for Suleiman’s abiding anger: it wasn’t just a racial slight, real or imagined. It was blowback. Suleiman landed in Paris because an Israeli airstrike killed his folks during the 1982 war in Lebanon.

Sounds perfectly reasonable—and something the neocons don’t want to hear.

As for the terror chief himself, to their credit, the writers did not caricature or dehumanize him. He is a thoughtful man who loves his family. But he’s also a mass murdering, Islamic terrorist.

The terror band’s murder of a Catholic priest sets up KG No. 2: the remorseless brutality of the Islamic terrorist. They killed the priest to set up the funeral. Disguised as priests attending the ceremony, they leave small, sarin bombs and exit, chain and lock the doors, and detonate the bombs with a cell-phone signal. It’s a nice plot device, given the murder of a parish priest a few years ago. Muslims slashed his throat during Mass.

Nor did the Jack Ryan creators leave untouched the truth about Islamic migration’s transformation into a network of hostile, impregnable Islamic banlieues. The city itself is nearly a no-go zone of burkas, hijabs, and chadors, along with store signs in unintelligible gibberish. Some parts resemble slums in the Middle East. The recent wave of Muslim colonists has trashed the streets. Meaning if the immigration continues, the next time you see Paris you might only be watching The Last Time I Saw Paris. And even if you do visit, you won’t be under the bridges of Paris at night.

The creators even allow a French cop—a voluble, vigorously gesticulating immigration foe—to explain angrily that Islam means “submission.” He laments the insidious suppression of the Old France he loves. He rants about the dispossession of his people and the attack on French culture.

Listening to him is Ryan’s black boss, James Greer (The Wire’s Wendell Pierce). But Greer, once a top operative consigned to Langley because of a major foul-up, is a Muslim —fallen-away perhaps, but a Muslim nonetheless. When the rightly-ranting Frenchman asks about that thing in his hand, Greer says he fingers his prayer beads so he doesn’t lose his temper when guys like the ignorant Frenchman are rightly-ranting.

This is mean to vaccinate the viewer against the Frenchman’s Islamophobic bacillus. Alas and alack, it’s too late. The viewer has been exposed. Somehow, the creators didn’t give the cop a Fashy, or portray him as a slobbering Neo-Nazi goon.

The cherry on top of all this truth-telling? A deadly fight with Muslim sex traffickers.

Ryan’s Muslim boss might be the one improbable character, and perhaps the most ridiculously contrived, shopworn platitude. Boy, he came in handy in Paris when he went to the mosque for the intel on Suleiman’s terrorists. See, Muslims are loyal patriots, too! Yeah, yeah, yeah. We get it. Don’t  hit us over the head.

For all we know, the CIA has employed plenty of Muslims—but hopefully as spies on the ground in target countries, not at Langley as top officers. We saw what happens when a Muslim, even one born here, rises high in the military, but then gets religion, and remembers where his true loyalty lies, at Fort Hood.

Anyway, the final episode depicts Greer, redeemed after tracking down the bad guys with Ryan, leaving Langley to be head of station in Russia. He offers Ryan another of the pearls of Islamic wisdom he drops throughout the season, the last from the Prophet himself.

But Ryan doesn’t answer with a word or nodding head to signal that Islam isn’t so bad after all. “I thought that was a very important lesson,” Greer says. Mystified, Ryan replies, “OK,” his eyes and face asking, doubtfully, What you talking about?

The show ends on a false note for immigration patriots. It’s the usual “we’re a nation of immigrants” propaganda, with a reunited family of Muslims living in Annandale, Md.

What a minute, what? Hearing Ryan mention that he had stashed the mother in a safe-house in Annandale lent the program an air of authenticity. Annandale is a real place. I lived minutes away for years. But it’s in Northern Virginia!

Whatever his politics, actor John Krasinski has turned out another patriotic piece of which he can be proud,  embedded leftist biases aside.

13 Hours is the other flag-waver. It’s the very conservative, riveting story about the disastrous foul-up in Benghazi that ended in the murder of Ambassador Chris Stevens. Krasinski is one of the heroic contractors who defended the consulate.

How patriotic is Ryan? Television critic, Sonia Saraiya, thought it was a “patriotic nightmare.” And who might this estimable critic be? Why, an “Indian-American,” of course, the ungrateful child of immigrants brainwashed at Brown University. Four years at the mind laundry is apparently responsible for this:

It lauds Jack Ryan—a true American hero who unfailingly escalates every situation and lacks even basic collaborative skills—while neglecting to even attempt to challenge the narrative of noble American involvement and intervention abroad. Both its protagonist and its plot are based on the foundational, unquestioned notion that American-military might—the best-funded killing infrastructure in human history—is helping to save the world.

Its other primary story objective is proving that Jack Ryan deserves his white male entitlement—which indicates just how closely American myths of masculinity are intertwined with international dominance. From frame to frame, Jack Ryan is an astonishing case study in toxic narratives. ...

Jack Ryan feels like a machine designed to turn us all into the sort of viewers who disappear smiling down jingoistic Fox News rabbit holes. It assumes that we—Americans, and America—are doing a good job. Talk about a fantasy.

Yeah, well, Sonia assumes that we—Americans and America—consider her one of us. Talk about a fantasy.

Whatever. Ignore the anti-American child of immigrants and enjoy Jack Ryan.