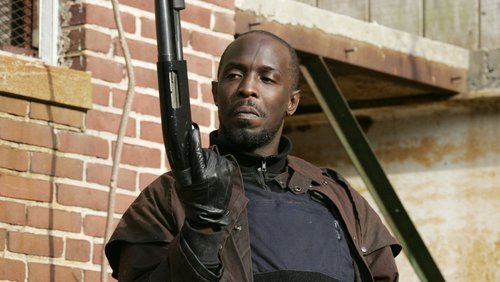 The Daily Caller reports that David Simon, the  creator of "The Wire," a television show that was one giant Kinsley Gaffe about black drug dealers (like the character pictured right) in majority black Baltimore, tweeted a call to murderous violence against the president.

If Donald Trump fires Robert Mueller and is allowed to do so, pick up a goddamn brick. That's all that's left to you.

Presumably, this would include picking up a brick and tossing it at one of Trump's supporters.

Note that Simon didn't offer to lead the brickthrowers. Perhaps he's the archetypal playground weenie who starts fights between others, but runs home crying to mommy when someone pops him in the nose.

This is no surprise, as anyone who read my piece on "The Wire" and Simon's reaction to a commenter at his own website will know. The commenter politely wondered whether it was time to "revisit Segregation," citing an article in the leftist Slate that said blacks never wanted integration or forced busing to accomplish it, but instead simply wanted to repeal unjust discriminatory laws broadly known as Jim Crow.

"You f*****g revisit it," he fumed. "I don’t want to live around white people with opinions like the one you just offered."

One wonders whether Simon would have hit the crimethinker in the head with a brick.