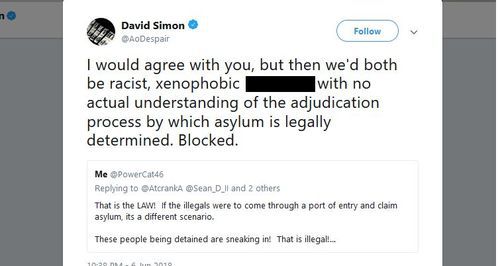 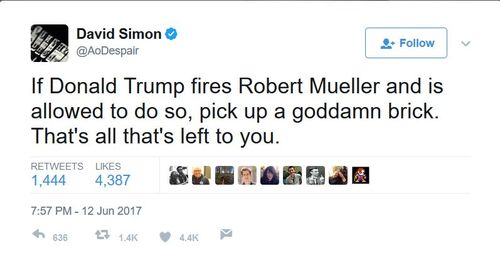 If you read my piece about David Simon, creator of HBO’s The Wire, you know how touchy he is. And extreme. He even suggested violence against Donald Trump.

That didn’t get him banned from anything, apparently, but Simon’s mercurial temper finally got him in trouble, Breitbart reports. Twitter has banned the foul-mouthed hater.

David Simon, the television writer and producer who created HBO’s The Wire and The Deuce, was locked out of his Twitter account after he graphically told a Trump supporter to die — prompting him to tell Twitter CEO Jack Dorsey to die too.

Simon, who told the Trump supporter, “You should die of a slow moving venereal rash that settles in your lying throat,” was locked out of his account shortly after.

These are not the remarks of a stable man, and naturally, he can’t understand what the problem might be.

“I have been banned from Twitter, and as I am at this moment indifferent to removing the tweets they insist are violative of their rules, it is unclear when I will return to that framework,” Simon announced. “So I’m hoping that if I post anything remotely meaningful about Tony [Bourdain], others will do me the favor of linking it beyond this digital cul de sac.”

“Suffice to say that while you can arrive on Twitter and disseminate the untethered and anti-human opinion that mothers who have their children kidnapped and held incommunicado from them at the American border are criminals — and both mother and child deserve that fate — or that 14-year-old boys who survive the Holocaust are guilty of betraying fellow Jews when there is no evidence of such, you CANNOT wish that the people who traffic in such vile shit should crawl off and die of a fulminant venereal rash,” he continued. “Slander is cool, brutality is acceptable. But the hyperbolic and comic hope that a just god might smite the slanderer or brutalizer with a deadly skin disorder is somehow beyond the pale. Die of boils, @jack.”

Simon concluded by claiming Twitter’s “standards in this instance are exactly indicative of why social media — and Twitter specifically — is complicit in transforming our national agora into a haven for lies, disinformation and the politics of totalitarian extremity.”

“The real profanity and disease on the internet is untouched, while you police decorum,” the writer proclaimed.

The story explains that Simon will continue to use language that gets him banned--although his account hasn't been deleted, as Jared Taylor's was. Simon's tweets are still there, minus the "offensive" one. He just can't post any more.  @jartaylor leads you to a screen that says "Account Suspended."

Call it the Robert De Niro Method. Or maybe De Niro should call it the Simon Method. Whatever, Simon and De Niro unmask the unhinged left, revealing what it is: inherently totalitarian. Any disagreement invites into a frothing, violent rage.