Couldn't Even Make It Two Days... "Nobody Kill Anybody For 72 Hours" Ceasefire In 70% Black Baltimore A Failure

Previously from Paul Kersey: CeaseFire! Blacks in 70% Black Baltimore Challenged to go Three Days (Aug 4 -6) with "Nobody kill Anybody" Campaign

If you've read The City that Bleeds: Race, History, and the Death of Baltimore, you know black people in Baltimore carefully protect their city by using black criminality to keep out white people from ever being a demographic threat to run things again. 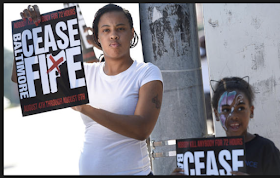 But for one fleeting moment in time, black people came together in 70 percent black Baltimore to call for a 72-hour ceasefire. In a city where black on black violence over the past decade dwarfs the lynchings in America we hear so much about (as justification for contemporary hatred of whites mandated by the state through public education), blacks came together to initiate a ceasefire over the weekend of August 4-6, 2017.

Unfortunately, blacks couldn't be compelled to keep the guns holstered for a little more than 24 hours.

The tagline of this effort (rooted solely in the prevailing blackness enveloping the city in an African quality of life) was "Nobody kill anybody for 72 hours." 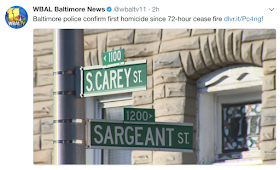 Not everyone was listening to a cry for help (hoping against the genetic reality of the quality of life blacks create anywhere they are found in the world) no white community has ever had to make.

Amid calls for a ceasefire, the familiar sound of gunshots in Baltimore, Baltimore Sun, August 5, 2017

Organizers and supporters of a 72-hour Baltimore “ceasefire” initiative marched and prayed Saturday, even as they acknowledged that their fervent pleas for peace could not halt the relentless pace of shootings and killings in Baltimore.

On the second day of a community initiative aimed at stopping — or at least slowing — gun violence, Baltimoreans held vigils, cookouts and other events. Some stood on corners with signs reading “Baltimore Ceasefire” or “Free Hugs.”

But even as ceasefire events continued late Saturday afternoon, police reported two shootings, one of them fatal. A 24-year-old man was shot in Pigtown, near Carroll Park, around 5 p.m. Saturday and pronounced dead at the Maryland Shock Trauma Center. A second shooting occurred earlier in the afternoon in the 4800 block of Park Heights Ave..

Earlier, ceasefire participants had said the goal was to help unify the city.

“This is to let the people in the community know that there’s hope,” said Tyrone Boyette, who was part of a somber walk in which participants stopped at each of the sites in a West Baltimore neighborhood where 11 men were killed in recent months.

“We know it’s not going to stop the murders, but it’s a start,” Boyette said. “If we can get more people involved and we can start having stuff for younger people to do, that’s how we’re going to stop the people from killing each other.”

Why not give the good people of 70 percent black Baltimore a small, polite round of applause (a golf-clap) for the effort in showing the world that they, collectively, could aspire to have a violence free weekend as found in all-white communities across the United States.

In the words of Jeb Bush: "please clap."

In the absence of whites in Baltimore,  Western civilization gave way to the type of community Africans in America could collectively create.

"Nobody kill anybody for 72 hours" is a fitting slogan to remind white people still with their heads in the sand it's time to finally understand the consequences of blackness.