Veteran novelist Joyce Carol Oates, 76, got attention for the Twitter campaign that she launched two weeks after the Mike Brown Hoax had been debunked, in which she sought to keep hoax alive. See Joyce Carol Oates On Michael Brown, The Threat Of Black Crime, And The Evil People Who Don’t Believe The Media Version, by James Fulford.

Ironically, if killers of Michael Brown had been more humane, they would have called ambulance & body would have been quickly removed.

Of course, the police had to leave the corpse in place as it was part of a crime scene. Had they prematurely moved it, Oates and all the other people screaming bloody murder at them for moving it too quickly, and thereby tainting the evidence?

And it turns out it was the black mob, not the white cops, who delayed the removal of the body. Calvin Whitaker, the private funeral director called by police to pick up Mike Brown’s body, has recounted how the terrifying black mob at the scene delayed him and his wife for an extra two hours, which they spent trapped, scrunched down in their SUV, unable to exit the vehicle, and surrounded by the mob, which also made it impossible to escape:

It was not a safe situation…. The police could not control the crowd. There was times where we feared for our lives…. There was gunshots while we were there…. It took so long, because we could not do our job. It was unsafe for us to be there. [A cop told the Whitakers] “Stay in your vehicles. You guys do not have vests. The best thing for you to do is to kind of get down, and let us get control of the situation.”

[Funeral director explains why it took so long to remove Michael Brown’s body from street by FOX 4 Newsroom, Fox4KC, September 8, 2014.

Unbeknownst to most people, Oates has been preoccupied with race her entire career, in the same manner in which she has sought to keep hoax alive in the Brown case.

Last year, she published a 667-page novel, The Accursed, which she’d been working on, on and off, for almost 30 years. Stephen King in his review said that it “may be the world's first postmodern Gothic novel.” [Bride of Hades|‘The Accursed,’ by Joyce Carol Oates, by Stephen King, New York Times, March 17, 2013.] 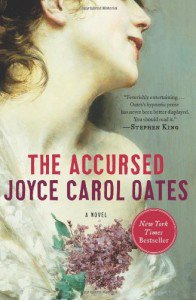 In The Accursed, white elites in Princeton, 1905-1906, including university and future American president, Woodrow Wilson, are cursed by demons and the Devil himself, because they didn’t do anything about a double-lynching of a pregnant black woman and her brother in Camden NJ in 1905, as well as three other lynchings of blacks in other New Jersey towns at the time. A character addresses Woodrow Wilson saying

“These lynchings are common in the South, and the murderers never brought to justice, and now they have increased in New Jersey, there was a lynching in Zarephath only a year ago—where the ‘white supremacists’ have their own church—the Pillar of Fire—and in the Pine Barrens, and in Cape May …”

But in reality, there was no (0) lynching in Camden at that or any other time… let alone in Zarepath, the Pine Barrens, or Cape May.

A listing of American lynchings from 1882-1968 at the University of Missouri/Kansas City cites only two in New Jersey for the entire period. [Lynchings: By State and Race, 1882-1968 ]Only one of these was of a black; the other was of a white (as were 27% of the total nationwide).

The one New Jersey lynching I could find during the period: former slave Samuel “Mingo Jack” Johnson, who was lynched in Eatontown back in 1886, after having been accused by a white woman of raping and beating her.

So Oates is propagating a falsehood. Of course, she would presumably say in her defense that it’s just a story—as imaginary as the “curse”.

But I say no—it’s a blood libel. Some of her colleagues will certainly be telling their students about imaginary “lynchings” in New Jersey as if they’d really happened. When people have to constantly lie about the past, that’s a tip-off that it wasn’t as bad as they assert. 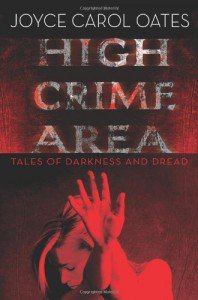 This spring, Oates published a new collection of stories, High Crime Area: Tales of Darkness and Dread,. In one, set in Detroit in 1967, the year of America’s worst race riot, a white woman senses herself being followed by a black man. However, the black man turns out to be an angel. As VDARE.com’s Fulford commented: “Here’s what it’s about—treating black crime as myth, and self-defense as paranoia.”

(Significantly, Oates and her husband, Raymond J. Smith, responded to the black Detroit riots by fleeing from the city to Ontario, Canada.)

This is not merely a literary point. If Oates’ new Detroit-set short story is taken seriously by her mostly female readers, it will lead to them lowering their guard around black men so as not to be seen as “racist.” Some of these white women will inevitably be raped and even murdered.

Oates poses as a feminist. Why, then, does she seek to get white women raped and murdered?

Once Oates did write about a real monster, or at least she was inspired by one. Her 1966 short story, “Where Are You Going, Where Have You Been?,” which was turned into the 1985 movie, Smooth Talk, was inspired by serial killer Charles Schmid Jr., the “Pied Piper of Tucson,” who strangled three teenaged girls in 1965.

Schmid was, of course, white.

The simplest indicator of what Joyce Carol Oates is about, is in her dedication to The Accursed.

“for my husband and first reader, Charlie Gross; and for my dear friends Elaine Pagels and James Cone”

Elaine Pagels is a controversial leftwing scholar of religion.

James Cone is the founder of genocidal Black Liberation Theology, whose most notorious follower is Barack Obama. Cone notoriously wrote,

“If God is not for us and against white people,” writes Cone, “then he is a murderer, and we had better kill him. The task of black theology is to kill gods who do not belong to the black community.”

I might as well dedicate a book to Nazi propagandist Alfred Rosenberg.

For the past 30-odd years, racial socialist politics have reigned supreme in the literary world. So, needless to say, Oates has won many awards in her over 50-year-long writing career, including the National Book Award.

But the biggest one of all has so far eluded her.

In order to get a Nobel Prize in Literature nowadays, you must either be a colored person (or pseudo-colored, i.e., a white Spanish speaker), or a white who hates his own race, or who is at least a socialist, if not a Communist. Thus we have Nobel’s going to the likes of Gabriel Garcia Marquez, Wole Soyinka, Naguib Mahfouz, Camilo José Cela, Derek Walcott, Kenzaburo Oe, Octavio Paz, Toni MorrisonDario Fo, Nadine Gordimer, Doris Lessing, et al.

There are typically two entries on each modern Nobel laureate’s page: A vacuous platitude that tells the reader nothing about the winner’s writing, and a second entry that gives the real story, the political rationale for the award.

“who through her magnificent epic writing has—in the words of Alfred Nobel—been of very great benefit to humanity.”

But the real explanation follows in the political section:

Deeply Involved in the Anti-Apartheid Struggle

South African Nadine Gordimer wrote from an early age, and published her first story at 15. Her works comprise novels and short stories in which the consequences of apartheid form the central theme. Some of her books have at times been banned in her native country. She depicts extremely complicated personal and social relationships in her environment, putting the face of racism before the readers.

In the case of black novelist Toni Morrison, the platitude section is merely a vague version of the political section:

Prize motivation: “who in novels characterized by visionary force and poetic import, gives life to an essential aspect of American reality”

Gave the Afro-American People Their History Back

In the case of West Indian black supremacist Derek Walcott, the Committee combined the platitudinous and the political:

Prize motivation: “for a poetic oeuvre of great luminosity, sustained by a historical vision, the outcome of a multicultural commitment”

The prize ought to be renamed the Nobel Prize in Propaganda.

The only conservative winner I could find from during the past 60-odd years: Trinidadian-born V.S. Naipaul.

In my opinion, Naipaul is the greatest living writer in English or German, the two languages I read in. But I contend that he got the award not because of, but in spite of his greatness. Naipaul is the last Englishman, a contemporary of my late Trinidadian father-in-law and, like Pa, has all the prejudices of a Victorian Englishman.

But the Nobel Committee recognized him because he is a famous colored writer. It even tried to make him sound like yet another racial socialist:

Prize motivation: “for having united perceptive narrative and incorruptible scrutiny in works that compel us to see the presence of suppressed histories”

Also in my opinion, the greatest Nobel laureates of all were T.S. Eliot and Rudyard Kipling. Here’s Eliot:

Prize motivation: “for his outstanding, pioneer contribution to present-day poetry”

Prize motivation: “in consideration of the power of observation, originality of imagination, virility of ideas and remarkable talent for narration which characterize the creations of this world-famous author”

“Virility of ideas,” indeed! And note how the citation actually has a connection to the writer’s works.

Were Eliot and Kipling writing today, however, neither man would have what might be called a Chinaman’s chance of winning the Nobel. In fact, each would probably have to self-publish his works. Their “virility of ideas” would get them Derbyshired.

Was Joyce Carol Oates always a race-baiting hack? Does she desire to lure white women into letting themselves get raped and murdered by black men?

On the evidence, the answer to both questions is yes.

Whether or not Oates wins her coveted Nobel, perhaps one day there will be a monument built to her, saying something like this:

Rebecca Weiss was sexually assaulted and murdered on this spot on February 1, 2015. Rebecca was a student of Joyce Carol Oates at Princeton, and an avid reader of Prof. Oates’ works. Prof. Oates inspired Rebecca to become a teacher in Camden High School, helping underserved minority children. Although Rebecca was killed by one of her children, a boy who had otherwise been a gentle giant, she would not have wanted others to be discouraged from helping those most vulnerable and needy, or for anyone to blame the victims of racism for their occasional mistakes. Rebecca’s parents have since adopted the child, visit him constantly in prison, and have been fighting for him to be paroled.