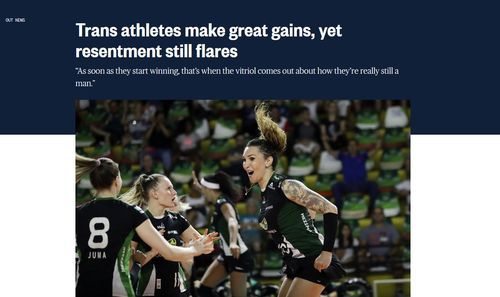 “As soon as they start winning, that’s when the vitriol comes out about how they’re really still a man.”

In other words, in the Current Year, this is the state of news coverage from the main wire service:

Across the U.S. and in many places abroad, transgender athletes are breaking barriers in high school, college and pro sports and being embraced by teammates and fans. But resentments can still flare when transgender women start winning and dominating their sport.

Exhibit A is a recent public exchange involving tennis great Martina Navratilova, who came out as a lesbian in 1981 and is a longtime gay-rights activist. She now stands accused of being “transphobic” after asserting that many transgender women — even if they’ve undergone hormone treatment — have an unfair advantage over other female competitors. …

Supporters of trans inclusion in sports were aghast. One advocacy group, Athlete Ally, ousted Navratilova from its advisory board and said she would no longer be designated one of its ambassadors.

“Trans women athletes aren’t looking to take over women’s sport,” Athlete Ally said. “They are women and want to compete in the sport they love, just as any other athlete would.”

Navratilova’s column reignited a social-media clash with Rachel McKinnon, a transgender Canadian track cyclist who in October won a world championship sprint event for women of ages 35 to 44.

Navratilova’s argument is “centered on a fabrication, fantasy, and a fiction,” McKinnon said in an email to The Associated Press. “She imagines a nonexistent cisgender man who will pretend to be a trans woman, convince a psychologist and a physician to prescribe hormone therapy, undertake the process for legal changer recognition, then wait the minimum 12 months of testosterone suppression required by the current IOC rules, compete, and then change his mind and ‘go back to making babies’?”

“No such thing will ever happen,” McKinnon wrote. “This is an irrational fear of trans women.”

Overall, supporters of increased trans inclusion are heartened by the pace of progress for trans athletes. A growing number of state high school athletic associations in the U.S. enable them to play on teams based on their gender identity, and the NCAA has trans-inclusive guidelines for all its member schools. …

“As long as trans people are losing and are not the best, everything is OK,” Carroll said. “As soon as they start winning, that’s when the vitriol comes out about how they’re really still a man.”

The vitriol can surface even at the high school level. In the track and field community in Connecticut, the dominance of transgender girl sprinters Terry Miller and Andraya Yearwood has stirred resentment among some competitors and their families. …

Most of the high-profile stories about trans athletes have involved transgender women; fewer transgender men have reached levels of achievement in men’s sports events that generated news coverage.