Ann Coulter: We Made Donald %#&@ Trump PRESIDENT—What Else Can We Do?

Congress has tried to sneak through amnesties three times in a little more than a decade. Every time, the American people somehow found out—despite the best efforts of the press—rose up in a rage and killed the proposed bills.

In 2006, President Bush got the brilliant idea to push Amnesty on the country. His party was wiped out the very next time voters could get to the polls.

Liberals like to claim that their brave opposition to the Iraq War led to the midterm slaughter, but, as I recall, they were against that war in the 2004 presidential election, too, and Bush won. An April 2006 Washington Post–ABC News poll—taken about a month after Bush launched his Amnesty crusade—showed that more Americans approved of Bush's handling of the Iraq War than approved of his handling of immigration. In nearly every poll on Bush's handling of immigration that year, a huge majority of the public disapproved. 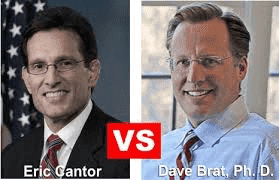 Three years ago, House Majority Leader Eric Cantor lost his seat to an unknown economics professor, Dave Brat, by a whopping 55 percent to 45 percent, despite outspending Brat 40-to-1. It was the first time in history a member of the Congressonal leadership had lost a primary. Brat had explicitly attacked Cantor for supporting Amnesty. (This despite Cantor being one of the “Young Guns”!)

Most spectacularly, last year, an utterly implausible presidential candidate crushed all his opponents—including the media—and won the White House by promising to deport illegals and build a wall.

The media imagine that President Trump's deficiencies are an argument for not taking his positions seriously. Oh no—it's just the reverse. The fact that Trump's supporters implacably stick by him, through every horror, proves they are willing to put up with any lunacy if it means getting that agenda.

How many different ways can Americans express that they want a whole lot less immigration and absolutely no amnesties?

We already tried Amnesty once. The 1986 Amnesty under Reagan was supposed to be a one-time fix. We'd forgive the estimated 1 million illegal aliens living here and, in exchange, draconian measures would be imposed on any employer ever caught hiring an illegal again—up to a $10,000 fine per illegal and jail time for repeat offenders.

We never got the employer sanctions.

There weren't 1 million illegals—it was 4 million.

It wasn't a one-time fix. In another real-world example of "incentives," the first Amnesty led to a never-ending stream of illegals across our border, confident of getting in on the next Amnesty. Today, there are at least 40 million illegals living in the U.S. (Eleven million is nonsense—they've been claiming that since 1986. See Adios, America,  Chapter 5.)

And now, once again, politicians are lobbying for the exact same policy that was a complete failure last time. When it comes to immigration, it's always Groundhog Day!

We're told the DACA Amnesty will apply only to a very small, discrete group of unbelievably fantastic illegals—who melt Ivanka's heart by refilling her water glass at Cipriani with such alacrity!

Not only that, but there will be strict requirements on who qualifies for a DACA Amnesty.

None of which will ever be enforced.

Congress has passed laws requiring that immigrants pay back taxes, learn English, not collect welfare and have good moral character. That's not too onerous, right? It's not like we're requiring them to have any skills or talents that would be valuable to America.

If you don't understand how that could happen, you have no idea how much our cultural elites hate this country. Their governing philosophy is: Anyone we bring in is at least better than an American!

This nation is mind-bogglingly generous. But decades of lies make it impossible for even the most tender-hearted American to fall for this bait-and-switch one more time.

Every politician swears up and down that he wants a "secure border." But then these same politicians go absolutely berserk when Trump says he wants to build a wall.

They say we'll get enforcement right after the Amnesty. That's obviously absurd. When the tub is overflowing, water pouring out of the faucet, across the carpets, down the stairs, up the dining room walls, we don't debate whether we're going to dry clean the curtains or throw them out. We don't argue about whether to use a mop or towels. FIRST: Turn off the water.

As long as both political parties stoutly refuse to build the wall, we know they are not serious about ever stopping illegal immigration. (Luckily, the Constitution gives the commander in chief full authority to protect our borders, with or without congressional approval.)

No matter how innocent and lamblike a "Dreamer" they produce to tear at our heartstrings, it won't work anymore. Decades of their perfidy has made sympathy impossible.

At a certain point, Ryan might actually produce a sad orphan. Who knows? It’s theoretically possible. But we could not be faulted for not opening the door.

Politicians and the press are themselves responsible for thoroughly killing any human sympathy Americans may have had for illegal immigrants—even the "Dreamers" (whom Ivanka adores, but would die before sending her kids to a school jam-packed with them).

The only question is: Will anyone in Washington ever listen?