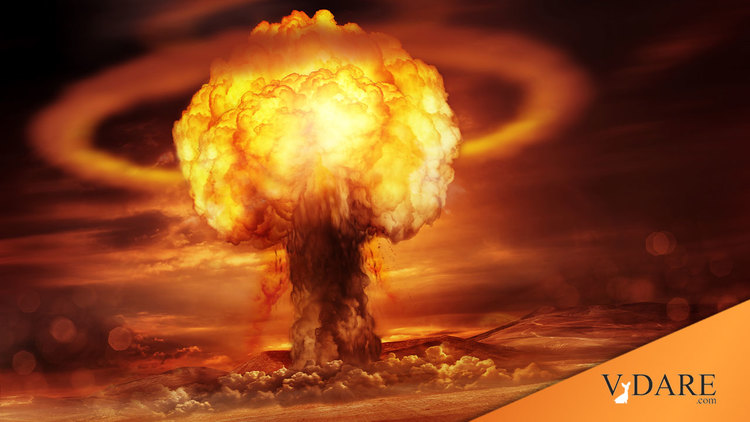 Let's Not Have a Nuclear War

Back in the 1980s, there was a vast Nuclear Freeze campaign in Western Europe and North America so as not to irritate Moscow. Interestingly, for many years, Wikipedia refused to host an article on this immense but memory-holed movement. I see from Web Archive that Wikipedia did not have an “https://en.wikipedia.org/wiki/Nuclear_Freeze_campaign” listing until 2019.

The origin of the Nuclear Freeze was in an arcane but important Cold War dispute.

Moscow ruled a mighty empire, but it was inherently more fragile than the West, especially the expansive but relatively non-diverse United States. The Kremlin’s claim to rule a vast empire from Vladivostok to East Berlin rested on its foreign policy performance, such as winning World War II and being treated by the United States as a superpower.

But that required a foreign policy whose audacity made up for the Soviet Union’s lack of capacity.

Initially, both the US and Soviet Union had built short- and then medium-range nuclear missiles, such as the Jupiters that the US installed in Turkey and the medium-range Soviet missiles installed in Cuba. But both sides developed long-range intercontinental ballistic missiles that could devastate each other’s homelands from their own homelands.

In the late 1970s, however, the Soviets began deploying their SS20 intermediate-range missile, which could only reach Western Europe rather than the United States. This was a curious development in that it was technologically backward in its capabilities, but that was its political point: the Soviets launching nuclear missiles that could only reach Western Europe might not set off WW3 but instead might merely initiate WW2.5.

If you were the President of the United States of America and the Soviet Union launched nuclear-armed missiles that, rather than threatening the U.S., could only reach Western Europe, would you launch American missiles from the Dakotas at Russia, thus inviting a Soviet counterstrike on the American mainland? After all, that’s what the U.S. doctrine of Mutual Assured Destruction (MAD) demanded.

Or would you feel sorry for the poor Western Europeans but figure that a Western hemisphere without nuclear devastation was, now that you mention it, not all that bad?

But if the American President would not be willing to fight a nuclear war over Western Europe to deter the Soviets, what was the point of resisting the Soviets rather than negotiating a Finlandization? After all, Finland didn’t have it so bad…

In response, the Russians promoted a massive movement among its sympathizers in the West to “freeze” the West in a position of disadvantage relative to the Soviet initiative.

This was prestigious in the West during the early Reagan-Thatcher years, with colossal demonstrations in 1982 against NATO countering the Warsaw Pact’s initiative. But in 1983, France’s leftist President Mitterrand came over to the NATO side, and that year the right won crucial parliamentary elections in Italy, Great Britain, and, most importantly, West Germany.

Strikingly, Ronald Reagan (President from 1981-1989) was appalled when informed of the MAD doctrine. He tried to negotiate away nuclear weapons with Mikhail Gorbachev in 1985 but stuck on his Star Wars defensive system.

Less than a decade later, the Soviet Union broke apart, with the most disastrous defection that of Ukraine on August 24, 1991, following the collapse of the Communist hard-liners' coup against Gorbachev two days before.

Reagan and the Nuclear Freeze movement were on opposite sides…but their mutual revulsion at the idea of nuclear war shared a common, not unreasonable root.

Nuclear war is about the worst idea humanity has ever come up with.

Let’s not do it. It would be really stupid to have deftly side-stepped nuclear war during the Cold War only to stumble into it today when so much less is at stake.

The most likely possibility of nuclear war during the Cold War was that the Kremlin would begin to lose its grasp on its diverse empire and thus up the stakes.

These days, however, nobody cares about the threat of nuclear war. Climate change is vastly more concerning. But still…