Ann Coulter: It Turns Out Bannon WAS Trump’s Brain

In order to prove he doesn't have dementia, as alleged in a recent book, President Trump called a meeting with congressional leaders on Tuesday—and requested that it be televised.

Ivanka: Show them at your best, Daddy!

He then proceeded to completely sell out the base and actually added to his problems by appearing senile.

In a half-dozen exchanges—which, again, he wanted televised—Trump responded to remarks as if he had no clue what the person was saying. One senator would talk—he'd agree. Someone else would say the exact opposite—he'd agree with that, too.

SEN. DIANNE FEINSTEIN: "What about a clean DACA bill now, with a commitment that we go into a comprehensive immigration reform procedure? ..."

TRUMP: "... I have no problem. ... We're going to come up with DACA. We're going to do DACA, and then we can start immediately on the phase two, which would be comprehensive."

SEN. FEINSTEIN: "Would you be agreeable to that?"

TRUMP: "I think a lot of people would like to see that, but I think we have to do DACA first."

REP. KEVIN MCCARTHY: "Mr. President, you need to be clear though. I think what Sen. Feinstein is asking here: When we talk about just DACA, we don't want to be back here two years later. You have to have security, as the secretary would tell you."

TRUMP: "But I think that's what she's saying."

REP. MCCARTHY: "No, no, I think she's saying something different. ..."

TRUMP: "I do believe that. Because once we get DACA done—if it's done properly—with, you know, security and everything else ..."

Trump was more than willing to sell out the base to solve a personal problem of his—the Michael Wolff book—but managed to not convince a single American that he's articulate, bright or a good leader.

On MSNBC, the hosts didn't say, "You know, we saw a new side of Trump today ..." Instead, they could barely suppress their giggles over the great negotiator being rolled.

The Democrats' opening bid is: Not only does every poor person in the world get to come live here, but all their relatives get to come, too!

They don't control any branch of government, and they're not budging from that.

Trump's counter-offer is: OK! My immigration policy is whatever you send me!

The people who do not realize Tuesday was the lowest moment of the Trump presidency have no idea what they're talking about. The headline on Trump's sit-down could have been:

"TRUMP ANNOUNCES SAME FAILED AMNESTY DEAL WE HAD 30 YEARS AGO"

The media have done such a fantastic job lying to the public that no one knows that.

To the average viewer, it sounds like a totally fair deal. We give only the BEST illegals a "pathway" to citizenship, they'll have to jump through all sorts of hoops, and in return, we'll get REAL security.

That's exactly what we were promised the last time. What we got: No hoops, no security and everyone got amnesty.

Second, ANY amnesty means there will be lawsuits, whereupon the courts will grant amnesty to everyone. All of Latin America, including Latin Americans still living in Latin America, can mosey up sometime in the next 20 years, present themselves to a Ninth Circuit judge and claim they were brought here as children.

HOW CAN PEOPLE BROUGHT HERE AS CHILDREN BE EXPECTED TO PROVE IT?

How do I know this? Because that's how the 1986 amnesty worked.

The Ninth Circuit was still approving applications under the 1986 amnesty in 2007—i.e., 20 years later—from applicants who claimed it wasn't fair that they weren't in the country at the time to apply for amnesty.

Result of requirements placed on illegals in the 1986 amnesty:

Congress could pass a law giving amnesty ONLY to left-handed Ph.D.'s in nuclear physics, and everyone would get amnesty. Even illegals who haven't arrived yet.

If there is a silver lining, it's that this isn't the first time Trump has sold out the base. He did it in the March 2016 GOP debate; in his "Hannity" interview in August 2016; in the meeting with tech leaders at Trump Tower in December 2016; and in his meeting with Nancy Pelosi and Chuck Schumer last year.

But it's now Trump's second year in office, we don't have a wall, and he just called a meeting to say, over and over again: "We have to do DACA first."

At this point, any sentient person has to see that the most plausible scenario is: 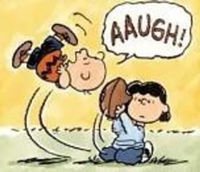 She moved the football.