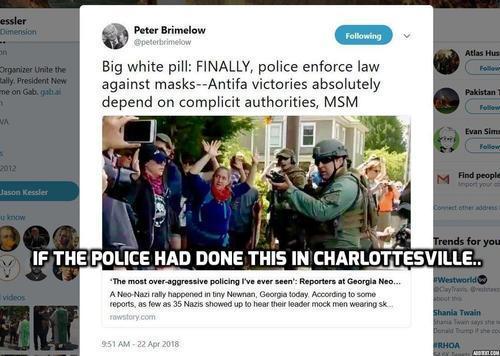 Comey is wrong, needless to say. Donald Trump’s instinctive insight that the Ruling Class Narrative about the Democrat-orchestrated suppression of the August 12 2017 Charlottesville VA Unite The Right rally was simply a Big Lie is, as VDARE.com Editor Peter Brimelow has noted, a key remaining reason to have hope for his Presidency. That Comey, formerly one of the U.S. top law enforcement officers, would participate in such a rush to judgement is just more evidence that he is a Deep State tool—or, as John Derbyshire has argued, a fool.

Nevertheless, three of the Alt Right Charlottesville Six political prisoners are still being held in jail, in scandalous contrast to their Antifa assailants, and the trial dates are drawing near. Meanwhile, in a classic case of unequal justice, one of their assailants—who was never held in jail— has already been acquitted despite video evidence by a Leftist judge.

Charlottesville exemplifies what the late Sam Francis called Anarcho-Tyranny: the city government not only refused to defend citizens, but it is punishing them savagely for defending themselves.

(Also held without bail: James Fields, accused of first degree murder in the death of Heather Heyer. I did not include Fields in my original Charlottesville Six count because, unlike them, he is accused of a genuinely serious crime—although remember George Zimmerman was still granted bail. However, I increasingly think Fields has a convincing defense, meaning that we should perhaps be talking about the Charlottesville Seven. Trial now set for November 26—15 months after the UTR rally).

You can write these men at: Albemarle County Jail, 160 Peregory Ln, Charlottesville, Va 22902 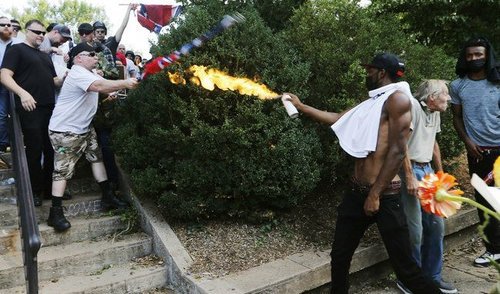 Three of the Charlottesville Six are free on bond:

Information on trial date was not made available via the Virginia Court Information database.

Cantwell was bonded out in December, but Albemarle County Prosecutor Robert Tracci took the unusual step of requesting to have his bond revoked so that he can be sent back to jail. The rationale for this request was not given but considering that Cantwell hasn’t left the city he’s been confined to by court order, nor contacted the alleged victims in the case, it’s speculated that Tracci may have taken offense to Cantwell’s characterization of transgenderism as a mental illness.

Ultimately the conditions of Cantwell’s bond were only temporarily restricted from his city of residence back to the dwelling in which he resides.

BREAKING NEWS: it’s just been reported that Cantwell was arrested last month “for being drunk in public,” which could affect his bond status [Cantwell facing charge in Loudoun County, Newsplex.com, April 19, 2018]

Other news: Nathan Damigo, formerly of Identity Europa, Evan McLaren of the National Policy Institute and JonPaul M. Struys were convicted of misdemeanor Failure to Disperse back in October. They bravely declined to pay their small fines and appealed on the grounds that the police were wrong to suppress a meeting whose legality had been approved by a Federal judge. Their jury trial is set for September 7.

Oddly, the few Antifa who ended up charged were all local blacks, whereas most of the agitation was from whites and Jews. Perhaps white Antifa have more political power.

As we covered in a VDARE blog post earlier this month, black “counter-protestor” Deandre Harris was acquitted of assault for hitting an elderly Confederate heritage supporter, Harold Crews, over the head with a metal flashlight. Crews had to compel prosecution in the face of law enforcement inertia. The charge had been downgraded from a felony earlier, based not on evidence but because of political pressure from Black Lives Matter activists like Shaun King.

In his decision, Chief Judge of the 16th Judicial District of Virginia, Robert H Downer Jr. stated, “I don’t see that Mr. Harris did anything wrong that day. It’s all on tape for me to see.” [Harris found not guilty of Aug. 12 assault; activists renew call to drop charges against Long, Blakney, by Lauren Berg, The Daily Progress, March 16, 2018]. What the tape actually shows is Harris and allies stealing Crews’ Confederate flag and hitting him as he struggled to keep it. Only after that was Harris chased down and beaten. Judge for yourself:

He'd previously admitted to cracking Eric Mattson of Alt-Lite group The Highwaymen over the back of his skull with a stick while he was marching with an American flag. However, Blakney's attorney argued that he was justified because someone had called him a racial slur earlier in the day and Blakney believed Mattson might be a "white supremacist".

"Flamethrower man," black “counter-protestor” Corey Long, who has been charged with disorderly conduct and misdemeanor assault, successfully requested that his trial be delayed until Jun 8th. His attorneys claimed to need more time to prepare for trial after rejecting a plea deal.

Note that none of these accused “counter-protestors” were held without bail.

Unite the Right organizers, participants and many pro-whites who had not even attended or been involved with the rally in any way at all have been sued in two lawsuits by the City of Charlottesville and wealthy attorneys from the Boies, Schiller, Flexner law firm. The city lawsuit is seeking an injunction to prevent further rallies. The Boies, Schiller, Flexner case is seeking monetary damages on behalf of people allegedly injured during the rally weekend. Motions to dismiss have been filed and a hearing is scheduled for May 24th at 10am.

Default judgments were rendered against Andrew Anglin of the Daily Stormer and East Coast Knights of the Ku Klux Klan. There’s no evidence that either of these groups or individuals were actually at Unite the Right last August, but they didn’t hire legal representation to fight the allegations against them. Heaping costs upon innocents is one of the insidious aspects of Leftist lawfare.

(City of Charlottesville has reached out to me with a settlement offer which I have rejected).

As I reported in February, the City of Charlottesville sustained a defeat in its campaign to degrade Confederate statues when Virginia Circuit Judge Richard E. Moore ruled Tuesday that the tarpaulins with which they had been shrouded had to be removed, So far, there have been no attacks on the statues, as threatened by the Left. The final ruling on whether the monuments are protected by Virginia monument protection law won’t be made until 2019.

Back in November 2017 I applied for a permit to hold a Unite the Right Anniversary Rally in Lee Park on August 12th, the one-year anniversary of the original rally, to support the Robert E Lee Confederate monument in Lee Park and highlight the government civil rights abuse of white activists at the original rally. It was the first permit request ever denied in Charlottesville history. Now I’m suing the City of Charlottesville in federal court for violation of my First Amendment rights. We’re alleging that this is part of a pattern and practice of discrimination against pro-white activists and asking for granting of the permit and compensatory damages.

In the wake of the Unite the Right rally a flurry of charges were filed against me, none of which directly related to the rally but which reflected the desire of Leftist activists and the Charlottesville area government to punish me for my political activity. A misdemeanor Disorderly Conduct charge was dropped last August [Jason Kessler, Charlottesville rally organizer, cleared of earlier disorderly conduct charge, by Andrew Blake, The Washington Times, August 22, 2017] and a Use of ID to Coerce or Harass charge dropped in January of this year [Misdemeanor Charge Dropped Against Jason Kessler, by Taylor Gleason, NBC 29, January 18, 2018]. Finally, the most serious charge, of felony perjury has been dismissed [Perjury charge against Kessler dismissed, by Lauren Berg, The Daily Progress, March 20, 2018].

The case stemmed from an incident last January where I was collecting signatures for a petition to remove Charlottesville City Councilor Wes Bellamy. Two men accosted me and I ended up punching one of them. I pled guilty to that. The incident was then forgotten until a few weeks after the Unite the Rally when Albemarle prosecutor Robert Tracci tried to claim that the difference between whether a man had “shaken” or “pulled” a petition from my hands was a felony crime.

As I told RT right after the conclusion of the trial, given how important discrediting my testimony would be to helping the Charlottesville government cover up its sabotage of the Unite the Right rally, this was clearly a politically-motivated hit job

It is highly unusual to pursue perjury charges after criminal litigation. Note that the Albemarle prosecutor has not filed perjury charges against the Cantwell accusers who made false claims, including that he sprayed one of them directly in the face with pepper spray, although the judge accordingly dismissed two charges  [Two Charges Dismissed Against Cantwell, by Lauren Berg, The Daily Progress, November 9, 2017].

If you’d like to donate to my legal effort against the city of Charlottesville please email attorney Jim Kolenich at jek318@gmail.com.