Tarps must come down from the statues of Robert E Lee and Stonewall Jackson in Charlottesville, Virginia Circuit Judge Richard E. Moore ruled Tuesday.[Judge Orders Tarps Removed From Confederate Statues in Charlottesville NYT, February 28, 2018]The judge found that Charlottesville City Council’s to covering the statues “in mourning” for Heather Heyer, killed after the repression of the last year’s Unite The Right rally, is tantamount to removal, a violation of state law. (BREAKING NEWS: Tarps came down at 6 a.m. today).

The tarps were removed multiple times since their inception by rebel Confederate heritage activists. So City Council erected unsightly fencing around the monument and declared the space a No Trespassing zone [Orange fences placed around Confederate statues, by Isabel Lawrence, Newsplex, September 19, 2017]. Subsequently, Confederate activists have been repeatedly arrested [Man arrested for third time for trespassing at Justice Park, by Lawson Gutzwiller, WDBJ 7, February 23, 2018] and several banned from the parks.

Meanwhile, the Left is openly proclaiming its intention to violate the law, as in Durham, NC where anti-Confederate gangs, including Redneck Revolt member Dwayne Dixon tore down a Confederate monument in broad daylight—notwithstanding which the prosecutor (black) dropped all charges. 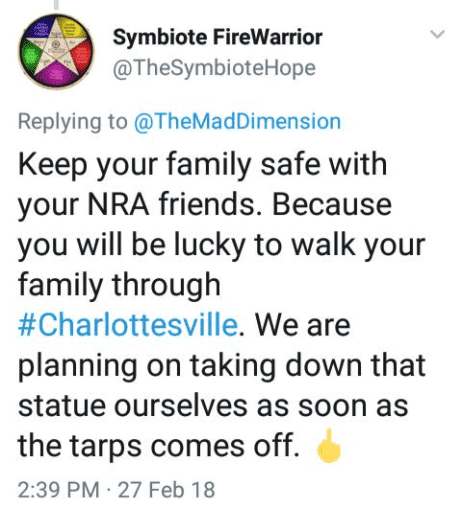 Other issues discussed in the hearing, from my notes:

The actual trial for that case is tentatively being considered for January 2019.