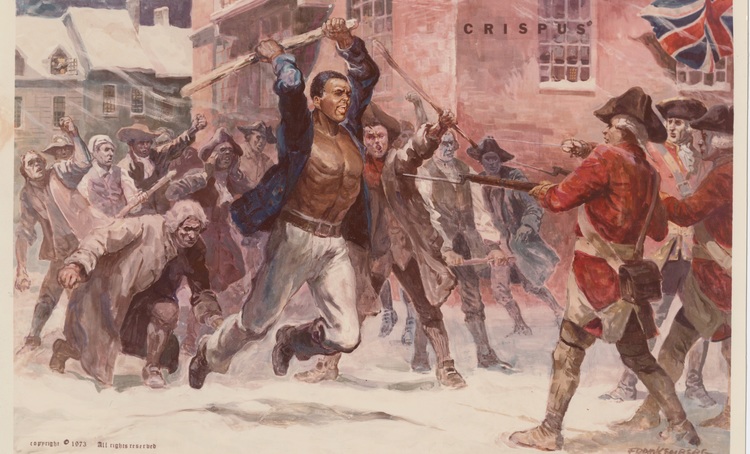 A critical reader asks why I didn't mention Crispus Attucks in my VDARE.com article on the proposed Bill Russell statue. It is a good point, but not for the reasons the reader suspects. Crispus Attucks, a free black, was the first American killed in the Boston Massacre, and we are often told, "the first casualty of the American Revolution." But he was never the hero people now portray him to be.

In fact, Crispus Attucks's only real achievement was getting himself shot, and this was also true of the whites who died in the Boston Massacre. If you taunt and accost armed soldiers while wielding a club, you should not be surprised when they fire at you. Contrary to the popular myth, Attucks and his cohorts were not motivated by patriotism.

Rather, they were upset because the Redcoats were also doing part-time work on the docks unloading British ships. This was work that the Americans had been very willing to do, but suddenly found more difficult to obtain. Sound familiar? During the trial, all of the British soldiers were acquitted of murder due to a brilliant defense by John Adams (See the HBO miniseries John Adams for a terrific depiction of the trial).

In his closing statement, John Adams actually blamed Crispus Attucks, "whose very looks was enough to terrify any person" for instigating the shooting. According to Adams, Attucks charged the soldiers and "with one hand took hold of a bayonet, and with the other knocked the man down: This was the behavior of Attucks; to whose mad behavior, in all probability, the dreadful carnage of that night, is chiefly to be ascribed."

However, in the 19th Century, Boston abolitionists began to specifically exaggerate the importance of Crispus Attucks, an exaggeration that continues to this day. After the Civil War, a memorial was built on the Boston Common to the "victims of the Boston Massacre", with Crispus Attucks prominently mentioned.

So perhaps the real legacy of Crispus Attucks is that he may be the first minority whose status was deliberately elevated for political purposes. Today, there are public schools as far away as Texas named after Crispus Attucks.Â  In 1998, the US Mint coined a "Crispus Attucks Silver Dollar."

Incidentally, people forget that the exoneration of the British soldiers was due in no small part to the testimony of a courageous black slave known only as "Andrew." But virtually no one remembers Andrew, and there are no schools or statues named after him.

Today, March 5, is actually the 241st anniversary of the Boston Massacre. There is a credible reenactment of the event every year around 9pm. Definitely worth attending (See video).