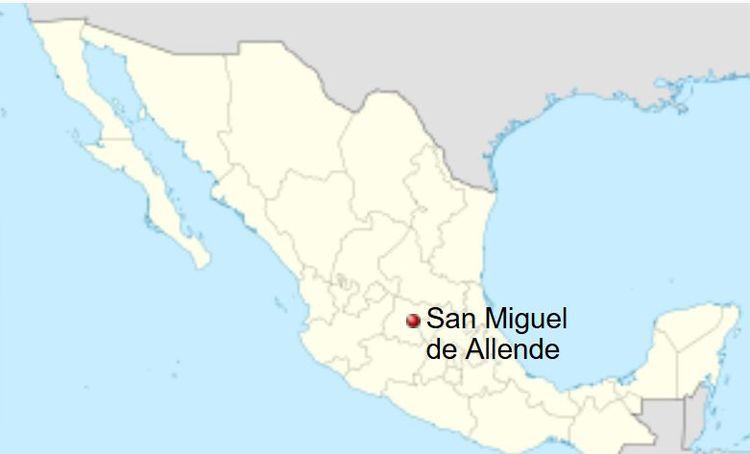 The Mexican invasion of the United States is just a nativist fantasy, says Mike Davis, author of No One Is Illegal: Fighting Racism and State Violence on the U.S.-Mexico Border

. You'll find the real invasion on the other side of the border—"gringo hordes" invading Mexico:

"…. while all the nannies, cooks, and maids have been heading north to tend the luxury lifestyles of irate Republicans, the gringo hordes have been rushing south to enjoy glorious budget retirements and affordable second homes under the Mexican sun."

That's what Davis tells us in his article Mexico's Immigration Problem on the liberal webzine TomPaine.com (Sept. 25th, 2006).

The article's ludicrous assertion that the U.S. has no immigration problem can be easily debunked by any casual VDARE.COM reader.

But Davis' treatment of the "gringo hordes" deserves a response from yours truly. After all, as an American citizen living in Mexico, I form a tiny component of those "gringo hordes. "

There are an estimated one million Americans residing in Mexico. But Davis' article only discusses Baby Boomer retirees living in gringo enclaves in Baja California and other such places.

I personally certainly don't live in any sort of gringo enclave. I live in a regular Mexican neighborhood and none of the other families on my street are American.

The truth is, we Americans in Mexico form a rather diverse group of people—a motley crew you might call us. Certainly, there are plenty of retirees, but also Americans who are working as English teachers or in various business enterprises. There are missionaries, artists, students, and other sorts of people. There are liberals, conservatives and apolitical types.

Even on the immigration question, we aren't in agreement. Some Americans here support mass Mexican immigration to the U.S. Some are restrictionists, and others are simply uninterested in the subject.

Some gringos in Mexico are worried that the immigration controversy in the U.S. will put their comfortable position here in jeopardy.

Now back to the Davis article.

It's true that many Americans are retiring in Mexico, but we have to put things in perspective.

To begin with, there are more Mexicans in the U.S. than Americans in Mexico, both by raw numbers and in proportion to the respective populations. (The official population figures being 300 million for the U.S. and 107.5 million for Mexico.)

That means that 1 million Americans in Mexico would add up to less than 1% of the population here.

How many Mexicans are in the U.S.A.? The Mexican government estimate [PDF] is that in 2005, the Mexican-born population in the U.S. passed 11 million.

Even if that figure is an undercount, by any measure there are more Mexicans in the U.S. than Americans in Mexico.

Now are all these gringo retirees sneaking into Mexico? On the contrary.

Even Davis admits in his article that FONATUR, the Mexican government tourism development bureaucracy, is promoting the settlement of Americans and Canadians in Baja California.

Why? It's the money. The Mexican government likes Americans retirees investing money in Mexico.

Davis seems to blame American expatriates for bringing in a slew of fast-food restaurants:

"An English-language paper in Puerto Vallarta, for instance, recently applauded the imminent arrival of a new shopping mall that will include Hooters, Burger King, Subway, Chili's and Starbucks. Only Dunkin' Donuts (con salsa?), the paper complained, was still missing."

I have to laugh out loud reading this. American fast food franchises are springing up all over Mexico. It's not because of the gringo hordes. It's because the Mexican government allows it and because Mexican consumers love American fast food.

Is that good or bad? I leave that to the reader to decide. Personally, it's no sweat off my back either way. Besides, I hardly think that fast food restaurants are the core of American culture, although many people seem to think that.

And how are Americans and Canadians able to obtain all this fabulous Mexican beachfront property anyway?

But the Mexican government itself found a loophole around that one, setting up a way for foreigners to buy beachfront property without really buying it.

It's called a "fideicomiso." It's a trust in which the bank technically owns the title for the property, but you are the beneficiary.

But you have to be real careful buying property in Mexico. You can't just take out a "fideicomiso" on any beachfront property—it has to be regularized by the government for that very purpose.

And, when you buy the beachfront property, you have to sign away all rights to complain to your government back home in case there's a land dispute and you lose it.

Several years back, some Americans in Baja found that out the hard way. They had taken out trusts on some property, but it wasn't regularized. They wound up losing their homes, and nobody could help them.

And gringos in Mexico are free to do about anything they want. Me, for example, I'm free to write columns for VDARE.COM.

But there is still a line you can't cross, which Davis didn't mention in his article. A foreigner in Mexico must not forget that he is a foreigner. You can complain about mundane matters (see if it gets you anywhere) but you can't get mixed up in politics or demonstrations or anything like that.

In the U.S.A., illegal aliens march openly in the streets, demanding their "rights" and nothing happens to them.

In contrast, Mexico still has this quaint idea that citizenship means something, and that non-citizens are not citizens.  Article 43 of Mexico's General Law of Population (Ley General de Población) decrees that:

Article 33 of the Mexican Constitution specifically authorizes the immediate expulsion of any foreigner whose presence the Mexican government deems objectionable. It states:

Article 33 - Foreigners are those who do not possess the qualities determined in Article 30. They have the right to the guarantees of Chapter I of the first title of this Constitution, but the Executive of the Union has the exclusive right to expel from the national territory, immediately and without necessity of judicial proceedings, all foreigners whose stay it judges inconvenient. Foreigners may not, in any manner, involve themselves in the political affairs of the country.

Truly amazing, is it not? Does the U.S. Constitution need such an article?

With typical hypocrisy, the Fox administration, which has constantly lobbied on behalf of illegal aliens in the U.S., has not hesitated to exercise Article 33 against Americans and other foreigners.

In May of 2002, 18 Americans were expelled for participating in May Day marches. In September of the same year 5 more were booted out for taking part in a demonstration in Oaxaca.

And here's an Article 33 case that just happened. Three Americans (two lawyers and an activist) working on a child molestation cover-up case (involving Cardinal Mahony and the Archbishop of Mexico) traveled to Mexico (on a tourist visa) to publicize a lawsuit being brought in Los Angeles. After holding a press conference, the three were expelled from Mexico and banned from returning for 5 years. [ Mexico Bans Lawyer Who Sued Archbishop By John Spano, Los Angeles Times, October 13, 2006]

The Mexican government knows exactly what it's doing. Sure, it lets gringos buy up beachfront property—with nationalistic safeguards. But no matter how many of the "gringo hordes" move to Mexico, the Mexican government makes a clear distinction between citizens and non-citizens.

Why can't the U.S. government do the same?