It’s disappointing that the key issue of immigration enforcement that sent more Republicans to Washington last November is being blown off first thing. On Tuesday I noted disapproval from a trusted authority: America’s Senator Jeff Sessions Slams Feeble Border Security Bill. In his press release, Senator Sessions criticized Mike McCaul’s bill: “We need reforms that actually work, protecting the jobs and communities of the American citizens we represent.” 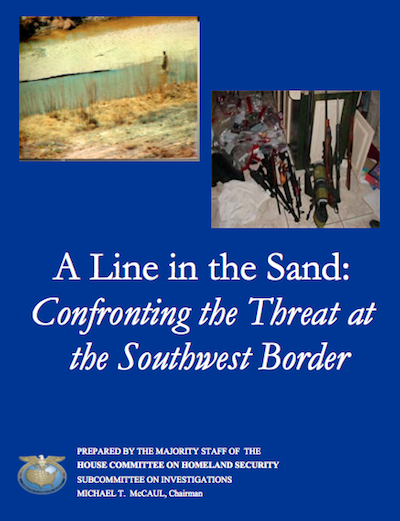 House Homeland Security Chairman Michael McCaul has done decent work in the past, including a 2006 border report (pictured). A 50-page update from 2012 is available online: A Line in the Sand: Countering Crime, Violence and Terror at the Southwest Border. It explains the variety of threats posed by an open border, e.g. Iranian influence in Latin America, transnational crime syndicates and violence against Americans committed by illegal aliens.

(Perhaps a third edition could include the public health lessons learned from last summer’s kid invasion, where all sort of communicable diseases such as TB were introduced into America and its schools.)

So McCaul is moderately well informed about the topic, but appears to be adopting an obedient poodle posture toward big-immigration guy, Speaker Boehner, who got a D grade in recent enforcement voting from NumbersUSA.

Border Patrol agents’ labor union announced their opposition Friday to the House GOP’s new border security bill, calling it “window dressing” that doesn’t add any new agents or updated their firepower to get the job done in sealing off the U.S.-Mexico border.

The agents’ opposition could be a major problem for House GOP leaders who have scheduled a vote on their bill for Wednesday, but who are facing a revolt among some conservative lawmakers who say the bill needs to go much further.

The legislation, written by House Homeland Security Chairman Michael McCaul, would direct the Homeland Security Department to build about 50 miles of more fencing, to fly more drones and add more technology sector-by-sector along the border, and to come up with a strategy for catching 100 percent of illegal immigrants or smugglers trying to cross.

But the National Border Patrol Council said the bill needs to be more specific in calling for an additional 5,000 agents on the southwest border — there are about 20,000 now — and for updating training to a 20-week course, and to acquire more M-4 rifles and other gear so they can operate out in the field.

“This legislation speaks about metrics but frankly does not provide either the strategy or the resources necessary to achieve them,” said Shawn Moran, spokesman for the union. “We need real solutions on the border where the trends are moving in the wrong direction with increased apprehensions, more aggressive action from smugglers and drug cartels, and continued threats from terrorists.”

Indeed, numbers show that illegal immigration has risen over the last few years, after dropping dramatically during the depths of the economic slump. The Obama administration was caught off-guard last year by a surge of illegal immigrants from Central America, who overwhelmed the immigration services and exposed serious loopholes in U.S. policy.

The labor union for immigration officers at U.S. Citizenship and Immigration Services, one of the other immigration agencies, announced its opposition to the GOP’s border bill earlier this week, saying that it didn’t do anything to change those policy loopholes that allowed illegal immigrants to show up at the border and claim asylum, guaranteeing immediate entry into the country, where they could disappear into the shadows.

President Obama contends the border is secure and getting safer. His Homeland Security Secretary, Jeh Johnson, issued a statement last week blasting the McCaul bill, saying it went too far in requiring certain actions. He said instead of setting new goals and requiring more fencing, Congress should give his department more money so it can pursue its own strategy.

“The bill does nothing to provide what the Department of Homeland Security really needs from Congress — appropriated funding to pay for vital homeland security initiatives,” he said.

Republican leaders are now caught between Democrats on Capitol Hill, who side with Mr. Johnson and Mr. Obama in asking for money but no new policies, and conservatives, who are reluctant to give the administration more money if it will be used to follow through on Mr. Obama’s new executive amnesties, which he announced without getting congressional approval.

Mr. McCaul said his bill is a first step, and GOP leaders have promised to tackle bigger immigration policy questions later this year, saying they want to take immigration step-by-step.

“The bill matches resources to needs putting fencing where fencing is needed and technology where technology is needed. My constituents in my home district and my home state of Texas spoke loud and clear. They want the border secured,” Mr. McCaul said.

His bill cleared his committee on a party-line vote last Wednesday.