Why Immigration Patriots Should Write Letters To The Editor—And Support Discrimination! 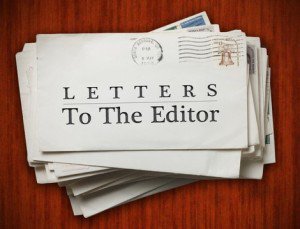 VDARE.com exists because, as founder and Editor Peter Brimelow wrote, “[M]any great and developing issues of the day are no longer covered in the Establishment Media—whether liberal or 'conservative.'" But Peter also hopes—I’ve asked him!—that readers informed by what’s posted here will be moved to DO SOMETHING—not just read-and-cluck about our nation’s ongoing demise.

The need for informed citizens to do something was clearly on the mind of then-Congressman Tom Tancredo [R-CO] when he addressed a Republican crowd in Des Moines on April 14, 2007 while running for president:

People everywhere ask me what can they do [about America’s immigration disaster]. Every time I get done with a speech somebody comes up and says what can I do now? You’ve gotten me all riled up about this issue; what can I do? And I always say well everything, everything that you can do. If it’s, you know, the people you influence around the water cooler, if it’s the people you influence when you write a letter to the editor or if you run for city council or anything. Whatever you can do is what you have to do.

Consistent with Tancredo’s advice, VDARE.com friend and letter-writer extraordinaire Tom Shuford [e-mail him] of Lenoir, North Carolina has, for years, been barraging newspapers across his state with immigration-sanity focused letters. Tom, whom I know in person, writes letters that are fact-filled, eloquent, and coolly stated. And he gets published.

Here’s an example from Thursday, March 26, in the Hickory Daily Record, published in the next county over from where Tom lives:

Immigration has its costs [title added by editors]

Who has the moral high ground? Cliff Moone (Hickory Daily Record Letter to the Editor, March 14) is sure it’s not conservatives: “Historically, the impulse of conservatives has been to argue for freedom to discriminate.” He’s right. Conservatives discriminate. Failure to do so can be dangerous. Illustration:

On Jan. 7, two French citizens of Algerian descent massacred 11 journalists at the Paris satirical weekly Charlie Hebdo. Why were the attackers in France? In the 1960s and ’70s, French political and media elites, like all Western elites, embraced the ideology of multiculturalism, and its corollary, mass third world immigration. Eager to demonstrate broad-mindedness and lack of discrimination, French elites took in hundreds of thousands of workers from Algeria, Tunisia and Morocco. The elites got multiculturalism; corporations got “cheap” labor. What could go wrong?

Charlie Hebdo symbolizes the rising tensions, collapsing trust and escalating frictions sure to come in years ahead. The French sense it. A much-despised far-right party, the National Front, is now the most popular political party in France. Elites are falling from favor across Europe.

The United States is not immune. In the ’60s and ’70s, U.S. elites became enthralled by multiculturalism and mass third world immigration. The U.S. opened immigration to the world in 1965. Immigration law had favored European countries as sources for immigration. But that was discriminatory. And what could be worse than discrimination? Perhaps the best symbol for coming strife in the U.S. is the endless battle between our elites and voters over how much to reward illegal entry into the United States. Twenty-six states have sued President Obama over sweeping amnesties-by-executive-memoranda, now temporarily blocked by a federal judge.

The U.S. Census Bureau offers another glimpse into the future. The Bureau projects whites will be 43.6 percent of the U. S. population by 2060. White children, 35.6 percent of the under-18 population. What happens to the descendants of a majority population that “voluntarily” makes itself a minority? We don’t have data on that, but here’s a safe prediction: shrinking opportunities across many fronts. Perhaps those beleaguered descendants will appreciate that although their ancestors gave away the country, they did not discriminate.

Note the structure of Tom’s letter: He began by referring to a particular subject—discrimination—from someone’s naive prior writing, pointed out consequences that flowed from the same vein of naiveté among our “elites,” and finished by circling back to that key word and using it ironically in his conclusion.

Another type of letter to the editor serves to fill in holes in a newspaper’s coverage of public affairs. For example, letters in the spring of 2013 about the disastrous Senate bill S. 744 could inform readers that this legislation would double legal immigration numbers, a feature even more catastrophic in the long run than S. 744’s mass Amnesty, the aspect of the bill that received most of the attention—and was still inadequately covered.

At ~350 words, Tom’s letter was a long one. But papers away from big cities have smaller circulations—e.g. the Record’s daily circulation is approximately 21,000, whereas the Charlotte Observer, the highest-circulation paper in North Carolina is at about 145,000 per day, averaged over seven days. Presumably smaller papers attract fewer letter submissions, so have the space for longer letters.

Writing informative, rational letters that are useful to the patriot cause—to be distinguished from the unfocused emotional rants that we may, understandably, feel like dashing off—is hard work. But it’s worth it: Dave Gorak, a (retired) veteran of the newspaper trade and a stalwart against our immigration madness, tells me that reader’s letters are one of the most popular sections in newspapers.

The Record’s letters section may attest to this: It’s quite lively, with letters published most days and multiple letters on many of those days. Indeed, as I write this on March 29, letters from as long ago as February 28 are still accessible and, astonishingly, the paper posted nine letters on Tuesday, March 17. (Perhaps these letters were actually printed in the Sunday, March 15 paper.)

With small-town newspapers, not only can letters often be rather long, the success rate in getting a letter published can also be quite high.

But what if you live in a big city whose newspaper prints only a small fraction of letters submitted and restricts published letters to, say, 150 words? Then it may be best to learn the ropes by sending letters to those small-town papers in your general area. After you’ve taught yourself to succeed with those, you can take on the task of writing short letters to the bigger papers, learning to condense your arguments while keeping them intelligible—and, thereby, improving the chances that your letter will be selected for printing and posting.

Tom Shuford’s letter above merits another comment, this time on its substance: The late Lawrence Auster saw our elites’ horror over discrimination as the fatal weakness of today’s Western civilization, returning to the point frequently. For example, here’s what Auster said about it in his speech A Real Islam Policy for a Real America at the 2009 “Preserving Western Civilization” conference, which Tom and I attended:

The entire Western world is at present under the grip of the modern liberal ideology that targets every normal and familiar aspect of human life, and our entire historical way of being as a society.

This liberal principle of destruction is utterly simple and radically extreme. Yet very, very few people, even self-described hard-line conservatives, are aware of this principle and the hold it has over our society. Instead of opposing non-discrimination, they oppose multiculturalism and Political Correctness. But let’s say that we got rid of multiculturalism and Political Correctness. Would that end Muslim immigration?

No. Multiculturalism is not the source of Muslim immigration. The source of it is our belief that we must not discriminate against other people on the basis of their culture, their ethnicity, their nationality, their religion.

This is the idea of the 1965 Immigration Act, which was the idea of the 1964 Civil Rights Act applied to all of humanity: all discrimination is wrong, period. No one in today’s society, including conservatives, feels comfortable identifying this utterly simple idea, because that would mean opposing it.

So, VDARE.com readers, please employ some discrimination in how you use your time: Write letters to editors about the horrors of mass immigration—while also providing prescriptions for their cure!