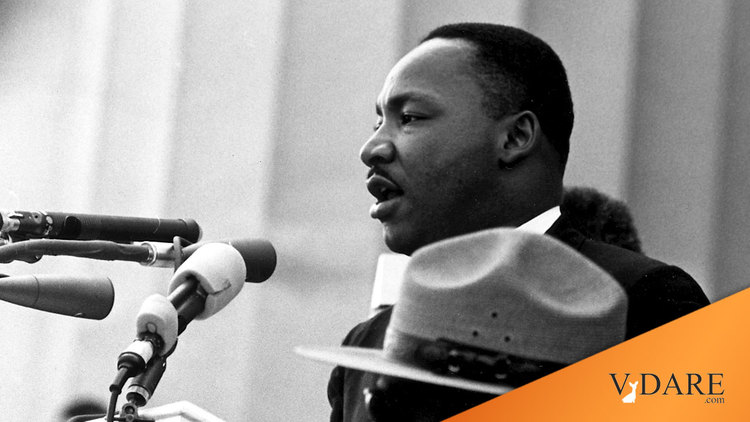 Back when conservatives started talking about the "culture war," they generally meant the clash over issues like sex, abortion, homosexuality, feminism and religion.

Now, having lost (or surrendered on) most of those issues, conservatives don't talk much about the "culture war" at all.

That does not mean, of course, that the war is over. It's just that it is now a race war, a conflict from which most conservatives are AWOL and the left is on the other side.

The reason the culture war has now evolved (or devolved) into a race war is that it is increasingly being fought between different races—sometimes whites versus blacks, when whites are willing to fight at all, but more and more often between blacks and Hispanics. The issue in the war is over whose culture—values, beliefs, myths, icons, etc.—will prevail, and culture is increasingly linked to race.

In San Jose, Calif., the lines of the conflict are now clear in a looming battle over the name of a local street. The Associated Press reports that a movement by some blacks in the city to rename "King Street" has stirred opposition from local Hispanics.

The blacks want to rename "King Street"—well—"King Street." That is to say, the present King Street is named after a chap (presumably white, though nobody seems to give a hoot) who settled the area in 1851. Talk about a dead white male. The proposal is to change the name of the street to "Martin Luther King Jr. Road."[PDF]

The later King never went to San Jose and the street has nothing to do with him, though of course he had little to do with the (literally) 660 other streets named after him across the country either.

The reason local blacks want to rename the street is that, as a local police officer says, "we're trying to enhance the area with a great man's name." That seems to be the best reason he and his allies can offer. [San Jose, Calif., Split Over MLK Street, By DEBORAH KONG, Associated Press, Sunday, November 2, 2003]

Since the street "runs through the heart of one of the city's Latino neighborhoods," it's not clear what "enhancing the area" means. Is something wrong with Hispanics that needs to be "enhanced"?

As for the Hispanics themselves, they are not especially eager to change the name.

"In San Jose," the AP reports, "the divide falls mostly between blacks and Hispanics, but the racial lines aren't absolutely clear. The National Association for the Advancement of Colored People's local president opposes the change, while some relatives of labor leader Cesar Chavez favor it."

The NAACP is against it because "we cannot have a black against brown fight," according to its local chieftain.

I guess it's OK to have a black versus white fight when the NAACP wants whites to name streets after King.

And the reason some Hispanics support the change is that they'd like the street (or maybe one intersecting it) named after Cesar Chavez, the Mexican-American labor leader and activist. Some years ago, Mexicans in the city put up a statue of the Aztec god Quetzalcoatl in the city center in place of the white American soldier who captured the city for the United States during the Mexican-American war.

That ought to tell you which race is in charge in San Jose.

It certainly tells the local blacks that. One black resident gripes,

"The area's going to remain the same. Nobody's moving anything. What is it that's being destroyed? The older African-Americans who've been there forever, what about us? It sounds like they're [the Hispanics] saying, 'This is our area. We own this.'"

It's nice someone understands what's going on.

What's going on behind the squabble over changing the street name is a racial conflict between blacks and Hispanics, and the issue is which culture—and thereby which race—will prevail.

It's the same conflict going on throughout the country and indeed every other multiracial society on earth. And it will get more bitter and perhaps more violent before one side or the other wins.

Which side that will be is by no means clear as yet, though the Hispanics, thanks to mass immigration and high fertility, have the advantage of numbers. But one thing is clear: Whites are no longer in the running at all.

No one bothers to ask whatever whites remain in San Jose what name they would like to have on the street.

Nobody even thinks about asking if they mind that streets named after a white man be renamed after a black or a Hispanic.

And any white who did object would be ruined and ridiculed.

Having lost (or surrendered in) the culture war, whites are now losing (or surrendering in) the race war that follows it.

How many more wars can whites afford to lose?