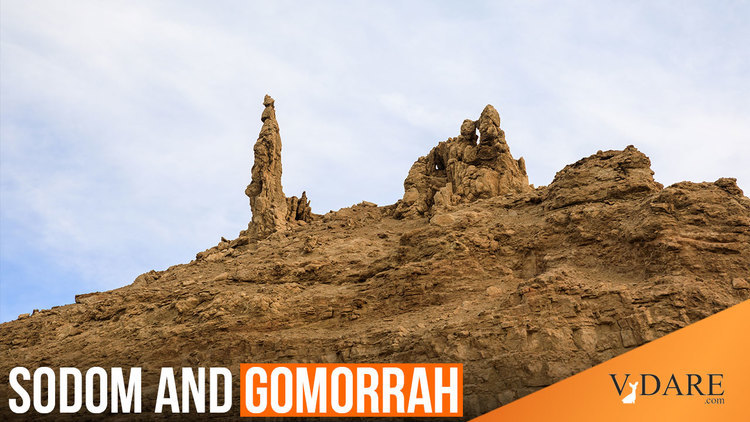 Thank goodness for conservative college student journalists. They bravely blow the whistle on the cultural rot plaguing the nation's institutions of higher learning. And they alert the public to the ugly truth about campus hedonism, which is downplayed by clueless administrators, admissions flacks, and faculty enablers.

According to Norman and Rudmann, anonymous gay sex seekers are using a university-sponsored Web site to locate partners for high-risk trysts in Berkeley campus bathrooms. Partitions between the stalls have been vandalized with so-called "glory holes" that are used "to peer into the stall next door to see if it is occupied by a man interested in sex. If it is, the student will cross into the stall and engage with him sexually, usually without any mutual acquaintance."

The reporters note that as many as 18 glory holes, which are used for much worse than peering, have been drilled across the Berkeley campus, including at men's bathrooms in two major lecture halls.

The UC Berkeley Queer Alliance/Queer Resource Center publishes the school-sponsored web site where glory hole locations and homosexual sex solicitations are posted. ("Find that special someone (or three)!" entices an ad, illustrated with three young naked men embracing, on the site.) The group receives free office space and over $9,000 a year from the student government.

Among the messages left on the Queer Resource Center online forum board:

The maps to the Cal Holes are the best map you can get this term. Full of fun and yum yum and good time.. we have the best holes in the UC system.!!

By mistake I have been in like Stephens (Hall) last year and there were these two hot guys… in there. I joined. It was hot!

I have heard so much about the wheeler hole? is there one? and if it is can an undergrad tell me about this? - if the G Hole is real I want to join other wheeler boys their this semester!!

You might think that homosexual activists, always first in line to clamor for government funds to preach "safe sex," would be most alarmed at this perilous and promiscuous trend. This is a public health hazard. (As with bathhouse enthusiasts, anonymous thrill-seekers in public restrooms are not likely to use protection against sexually transmitted diseases.) This is also a public safety threat to other students unknowingly using these marked bathrooms for what they were intended, while lecherous strangers ogle nearby.

Campus police told the publication that the situation was much worse than portrayed.

School officials have an obligation to clean up this mess. The university's Student Code of Conduct prohibits "conduct which threatens or endangers the health or safety of any person." UC policy also forbids the damage or misuse of university property. But the California Patriot's publisher, Robb McFadden, told me last week that "to our knowledge, the University has taken no further action to stop this problem."

In typical Berkeley fashion, homosexuals on campus see the bathroom bacchanalia as a sacred celebration of Free Speech and Diversity. John Mendoza, co-chair of the UC Lesbian Gay Bisexual Transgender and Intersex (what?) Association, enthused that the Queer Resource Center message board is "a great place for people to express themselves."

"It's a great portal to campus events," he said.

Anyone who challenges this behavior is, naturally, labeled an intolerant homosexual-basher. The California Patriot was the target of an anonymous satirical "hit piece" snidely accusing the lead reporter on the bathroom story of being gay. Student Justin Wong of the "Queer Council" complained that the article was the result of a "witch hunt." And one news editor was told by a Berkeley administration official that Norman and Rudmann's article was "homophobic."

A deviant practice common at filthy truck stops has infected the hallowed ivory tower, and all the campus Left can do is blame the messenger and play the victim card? Welcome to Sodom & Gomorrah University: