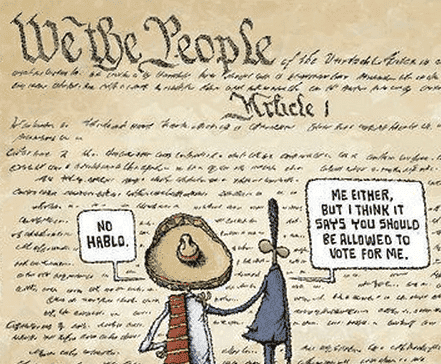 I see via One Old Vet that The Daily Caller’s Neil Munro has come up with another zinger: Obama youth amnesty numbers jump to 1.9 million 8/13/2013

The estimated number of younger illegal immigrants potentially eligible for the 2012 “Deferred Action for Childhood Arrivals” offered by President Barack Obama has jumped from 800,000 to 1.9 million.

The new estimate of 1.9 million was released Aug. 12, by the D.C.-based Migration Policy Institute, and it is 138 percent larger than the original 800,000 estimate announced in June 2012 by the Department of Homeland Security

This of course refers to Obama’s end-run around Congress last summer to implement the “Dream Act” without legislative authority. Disgracefully this went unchallenged by the GOP Congressional Leadership and the Romney campaign.

Such expansion was predictable and expected. Needless to say the beneficiaries are in fact not valedictorians, but of very poor educational quality - but are being rubber stamped anyway.

Just over 1 million people are immediately eligible for the temporary amnesty, but only 8,000 have a post-graduate degree, and only 53,000 have a bachelor’s degree…

Of course the question this raises is how many illegals will claim amnesty under the Schumer/Rubio Amnesty/Immigration Acceleration bill? The number eligible has been mysteriously and conveniently walked down to 11 million from the 12-20 million usually suggested a few years ago.

On this basis America can expect over 26 million new Democrats. This would also be in line with the 1986 Amnesty experience.