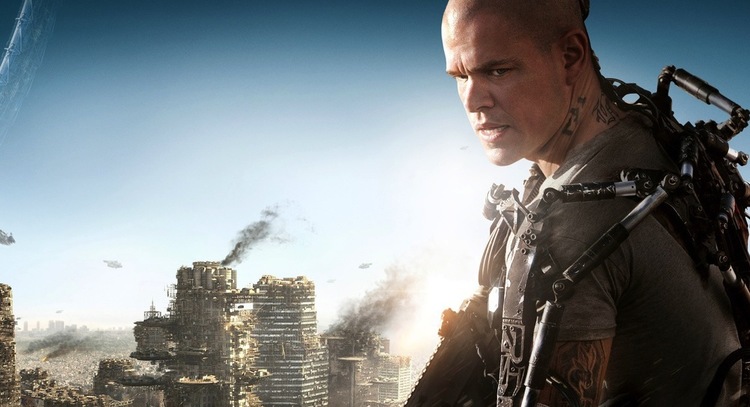 From my movie review of Elysium in Taki's Magazine:

Elysium, another science-fiction fable from young Boer refugee Neill Blomkamp about the horrors of mass immigration and nonwhite overpopulation, isn’t terribly amusing to watch. But at the meta level, the career of Blomkamp, whose mother dragged the family off from Johannesburg to Vancouver after a 17-year-old friend was shot dead by black carjackers, is one of the funnier pranks played on the American culturati’s hive mind in recent decades.

I’ve read over a hundred reviews of Blomkamp’s two movies, and virtually no critic has noticed that he does not share their worldview.

... Much like Blomkamp's District 9, an allegory inspired by Zimbabwean illegal immigration to Johannesburg, Elysium is another Malthusian tale about open borders, set in a dystopian 2154. By then, Los Angeles has been completely overrun by Mexicans, who have turned it into an endless, dusty slum that looks remarkably like urban Mexico today. (Blomkamp filmed for four months in Mexico City.)

And here's the end of the Wired profile of Blomkamp that is the most insightful piece I found:

The director finds it unfortunate that observers are already drawing parallels between Elysium and the Occupy movement, a phenomenon that he says wasn’t even a consideration. Blomkamp identifies as neither liberal nor conservative, which doesn’t stop people from ascribing all sorts of agendas to him and his films. The focus group comments for an Elysium test screening bear this out: “Some people said, ‘This guy’s a racist!’ and other people, ‘He’s a liberal!’ It’s like, well, which is it?”

It’s a good sign, in his view, that the film provokes such disparate reactions. But he doesn’t care for the idea that by making two Big Theme movies he’s bound to be branded a political filmmaker. “That would be the worst calamity of my career,” Blomkamp says. Though given that he’ll soon be back shooting in Johannesburg, it’s easy to imagine worse calamities. Around his neck, tucked under his T-shirt, Blomkamp wears a talisman bearing the Latin phrase Dominus custodiat unum (“May God bless you and keep you”). It’s a gift from Tatchell (his wife), intended to keep him from getting shot on return trips to his homeland.

He’d better hold on to it. Within six years, Blomkamp hopes to buy a skyscraper, maybe 40 or 50 floors, in downtown Johannesburg—a place to stay when he’s in town. He insists it’s not such a crazy dream; since the crime rate skyrocketed downtown in the late ’90s, so many high-rises went vacant that they can now be had for a relative pittance. He envisions the building as his own version of Blade Runner ’s Tyrell Corporation headquarters.

It sounds a lot like his own little version of Elysium, I point out. “Exactly,” he says. “That’s exactly what I want.”

Blomkamp is likely referring to the Ponte City skyscraper, because one of the last shots in District 9 is of Ponte City (the oval skyscraper with a "Vodacom" sign on the top). The Wikipedia article on the building points out the symbolism:

Ponte City is a skyscraper in the Hillbrow neighbourhood of Johannesburg, South Africa. It was built in 1975 to a height of 173 metres, making it the tallest residential skyscraper in Africa. The 54-story building is cylindrical, with an open center allowing additional light into the apartments. The center space is known as "the core" and rises above an uneven rock floor. Ponte City was an extremely desirable address for its views over all of Johannesburg and its surroundings. During the 1990s, after the end of apartheid, many gangs moved into the building and it became extremely unsafe. Ponte City became symbolic of the crime and urban decay gripping the once cosmopolitan Hillbrow neighborhood. The core filled with debris five stories high as the owners left the building to decay. There were even proposals in the mid-1990s to turn the building into a highrise prison.[2]

Buying Ponte City would be a massive rigid digit by Blomkamp.

By the way, I haven't seen anybody mention Elysium's several references to Idiocracy.

The most obvious are the discouragingly incompetent name-signs on the outside of hospitals. But Blomkamp's buddy Sharlto Copley, as the bad guy South African mercenary, uses at least one catch line from Idiocracy, and may have used more; but I could barely understand a sentence he said.