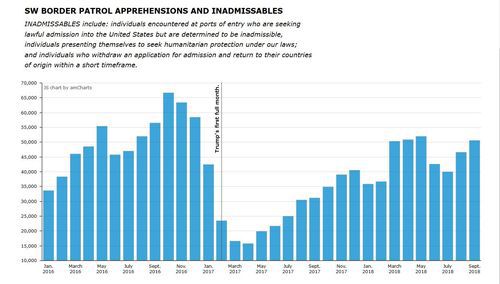 There's a lot of Border Crisis Denial in the MSM. Sample: Why the migrant caravan is not a border crisis, By Elizabeth Oglesby, The Hill, October 23, 2018.

There's always a crisis in the border (has been for the entire 21st century) which has been somewhat abated from time to time since the election of Donald Trump. (We call this the Trump Effect.)

Here is VDARE.com's fever chart of the most recent available numbers (September) for border apprehensions

By the way, if anyone thinks America should just be using the Border Patrol, not the Army, let me remind you that this chart of apprehensions only shows the ones the Border Patrol caught, and the Patrol admits that a lot of people get past them.

There are a minimum of eleven million illegals in the United States. That's the scale of the crisis.

Protecting borders and preventing invasions is what armies are for.