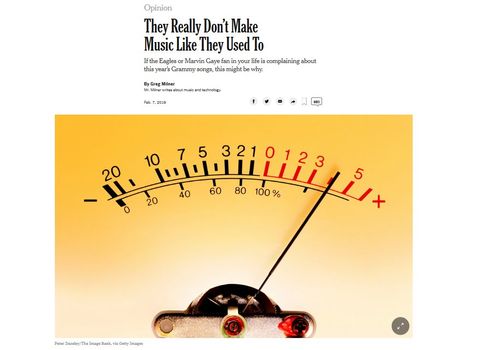 Technology That Gets Worse: They REALLY Don't Make Music Like They Used To

An interesting article in the NYT points out that the dynamic range of pop music has gotten narrower over the decades, comparing Marvin Gaye’s spacious 1971 track “What’s Going On?” to Childish Gambino’s droning current Emmy nominee “This Is America.” The quietest milliseconds of the new song are louder than the quietest moments on Gaye’s famous old song, while the loudest bits of the new track are all equally maxed out.

My impression is that in 1971 ambitious musicians were making music to be played on ever improving component stereo systems, which had reached an impressive degree of fidelity. For example, I once bought a giant pair of Bose speakers whose manual insisted that you place them as specific spots in your living room: i.e., you would need to lay out your living room around your speakers. That seemed perfectly reasonable to me at the time.

But eventually it became less fashionable to make yourself a slave to your stereo. Smaller, more convenient stereos came to be seen as good enough. Today, a huge fraction of music is listened to on tiny earbuds. Current day songs are mostly engineered to sound kind of mediocre.

Similarly, average telephone sound quality is worse today than, say, 35 years ago. Many people have gotten rid of their home landlines and just use cell phones. Not surprisingly, young people don’t much like talking on the phone and switched to text messages.