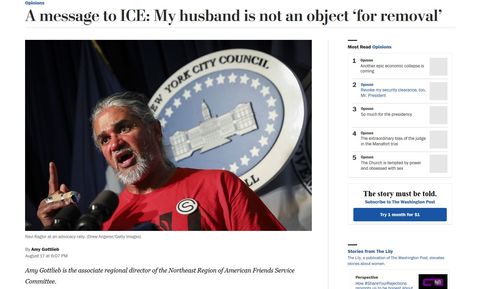 Ya Gotta Read This One: "My Husband Is Not An Object ‘for Removal’"

In case you were wondering whether the tyrannical Trump Administration has yet managed to deport mortgage fraud felon Ravi Ragbir (convicted of 7 counts of wire fraud in 2000 and his appeal was shot down by Judge Maryanne Trump Barry 16 years ago) back to Trinidad, from the Washington Post today:

A message to ICE: My husband is not an object ‘for removal’

By Amy Gottlieb
Amy Gottlieb [Email her]  is the associate regional director of the Northeast Region of American Friends Service Committee.

This month, my husband, Ravi Ragbir, received a new appointment letter from Immigration and Customs Enforcement. The reason for the appointment, the letter said, is “for removal.”

“For removal,” as if Ravi, a prominent immigrant rights activist and the person I love and have chosen to spend the rest of my life with, were a broken vacuum cleaner set out in the trash with a note for the Department of Sanitation to take him away.

An immigrant from Trinidad, Ravi has lived in the United States for almost 25 years and has faced the threat of deportation since 2006, when his green card was taken away after he completed a sentence for a wire-fraud conviction (which he is challenging in court).

Uh … His appeal was rejected 16 years ago.

Under the Trump administration, the threats of deportation have escalated.

In January, he was detained during a routine check-in with ICE and was incarcerated for 18 days in a detention center under threat of immediate deportation. It was only because of massive amounts of community pressure and quick work by his lawyers that he was released. He remains in the United States because of the federal judges who recognize that he should be here with his community as his case continues….

I have been an immigrant rights attorney for 20 years, but the cold, annihilating language of “removal” chills me now more than ever. The word replaced “deportation” in 1996 as part of a large and ultimately devastating overhaul to our immigration laws signed by President Bill Clinton. The legislation made it both easier to deport people and more difficult for people to adjust their immigration status legally. …

But once I saw my husband’s appointment letter, the real meaning of “for removal” finally struck me. It stripped Ravi of his humanity, as it has for millions of others living under threat of permanent exile. We don’t remove things we love; we remove things we no longer need or want. We remove garbage. We remove unwanted furniture or things that no longer work. We remove warts, stains, problems.

Those are good descriptions of your white collar criminal husband, lady.

That, apparently, is what Ravi is to this government.

I believe this dehumanizing is essential to a system that allows the government to separate families without repercussion. I believe it’s what allows ICE agents to sleep at night — to ignore the terrified and heartbroken loved ones desperate to keep their families together.

Thanks to an outpouring of community support and pending legal cases, federal courts have prevented ICE from taking Ravi away, and we have tried to maintain a sense of normalcy in our lives. But the specter of losing him hovers over us every day.

As anyone who knows Ravi would agree, my husband is the type of person this country should be welcoming.

Mortgage fraud is just a job Americans won’t do anymore. There are fraudulent mortgage opportunities rotting in the files.

To do that, we need to abolish the agency that has stripped immigrants of their dignity. And we need to repeal laws that tear apart families and create an immigration system that supports our values of love, respect and community. Because, after all, no one should be treated as if they were disposable.