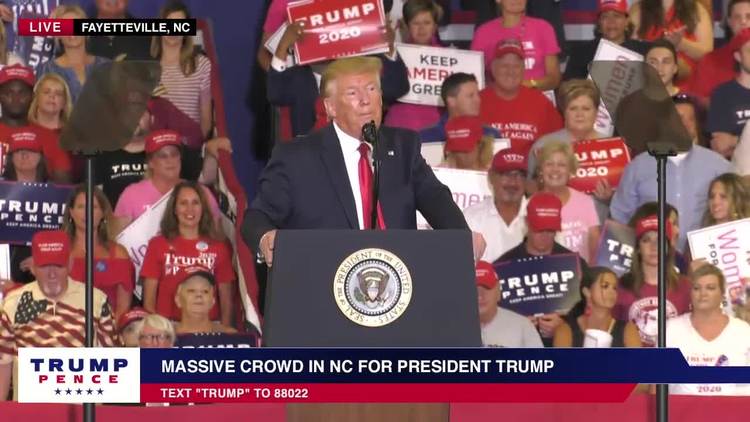 With Help From Trump, Republicans Hold On In North Carolina Special Elections

Dan Bishop, who aligned himself firmly with President Donald Trump, squeezed out a narrow victory in a critical North Carolina special election. The bad news is that this is a district that candidate Donald Trump dominated. Bishop only won by two points.

In a major victory for both President Trump and national Republicans, North Carolina GOP state Sen. Dan Bishop was projected to win a fiercely contested special U.S. House election widely seen as a bellwether for the president's chances in the 2020 election.

Another Republican House candidate decisively won a separate special election in a GOP-leaning district elsewhere in North Carolina earlier Tuesday evening—frustrating Democrats who spent millions trying to make a splash in the state, only to come up short.

The clean sweep heartened the president, who has long emphasized the national implications at stake. Trump unloaded on Bishop's Democratic opponent, Dan McCready, in a fiery rally on Monday night, telling attendees that "to stop the far-left, you must vote in tomorrow's special election."

The main problem Republicans face is that they are losing strength in the suburbs, possibly because of President Trump's frequent temper tantrums and personal disputes. This wouldn't be as big of a problem if the president was delivering on infrastructure, immigration, and his promise to turn the GOP into a "workers' party." However, he's been disappointing.

North Carolina’s Ninth is, after all, a staunchly conservative district that’s been electing Republicans since the 1960s, and one President Donald Trump won by 12 points in 2016. Bishop’s win should have been relatively easy, but was overshadowed by the previous Republican candidate fielding allegations of ballot fraud and suburban voter pushback toward Trump. The fact that Bishop held onto the seat for Republicans will surely be a relief for the party.

Still, Republicans looking ahead to 2020 might worry about similar districts; the tight margin doesn’t bode well for competitive seats in suburban districts across the country. If anything, Bishop’s race suggests GOP candidates in these places should be concerned about maintaining any existing advantages they currently have.

Still, there are some reasons Republicans should be happy.

But his poor showing among rural Trump Dems (yes, they're a real constituency) cost Dems a pickup.

What does this show? Rural voters are still sticking with Trump and his personal intervention in this race was probably a factor in Bishop's victory. Rural and working class white voters may not turn out in the numbers we saw in 2016, but Trump's still got most of his base. They still have Trump's back. The question is whether the Republicans can staunch the bleeding in the suburbs.

Much of that will depend on who the Democrats put up. Joe Biden may be going senile, but he could be seen as "moderate" by suburban voters getting their news from the ferociously anti-Trump media. However, just about every other candidate the Democrats are putting up might scare away suburban voters, along with a lot of other people. As usual, the best asset President Trump has is the radicalism of the Democrats.

Republicans should not be comfortable. They should not repeat the fatal complacency they showed in 2018. But they shouldn't panic either. Tonight was a 2-0 win for the GOP, no matter how the journalists spin it.