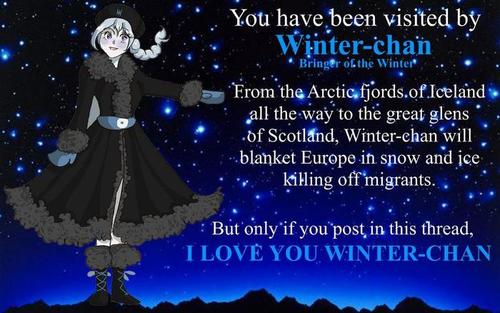 Winter-Chan To Freeze Refugees. Prepare To Be Blamed.

When a crazed old woman adopts dozens of cats that she can't possibly care for and they predictably start dying, we don't honor her "good intentions." We shake our head, bemoan her mental handicap, and send workers to rescue those animals who are left and demolish the squalid house [A Cat Lady Culture, by Gregory Hood, Radix, June 2, 2015]

However, when another crazed old woman, in this case Angela Merkel,  invites millions of immigrants to Europe even though there is no way to feed, house, clothe, employ or assimilate them, we call her a hero. We might even give her the Nobel Prize. We actually ban criticism of her and attack those who make common sense objections to this idiotic and dangerous plan. We even pretend that she herself didn't call multiculturalism a "failure" just a few years ago.

None of that changes the fact that the inevitable deaths of migrants (and Europeans), including those that have already occurred, are squarely "Mama" Merkel's responsibility.

Migrants crossing the Balkans will begin freezing to death as winter approaches, the head of European Union has said, as leaders warned the continent was "falling apart" trying to deal with the biggest refugee crisis since the Second World War.

As leaders of eastern European countries turned on each other at a foul-tempered emergency summit in Brussels, they said the Schengen visa-free zone and even the European Union itself could be pulled apart as states threw up borders to halt the influx.

Jean-Claude Juncker, the president of the European Commission, said a solution was urgently needed or thousands of refugee families facing winter temperature on the hillsides and freezing river-banks of Eastern Europe, would die.

"Every day counts," he said. "Otherwise we will soon see families in cold rivers in the Balkans perish miserably."

The changing of the seasons? What an unexpected disaster! Who could have predicted such a thing? To the leaders of the European Union, we apparently live in Westeros from Game of Thrones, where the seasons last for years and change at arbitrary times.

The EU's climate expert reports a white raven has been received at the Citadel in Brussels, meaning winter has come

We know what will happen next. Just as the easily preventable death of Aylan Kurdi was gleefully seized upon by EU bureaucrats and parasitical NGOs to push through more Muslim immigration, so will the future suffering and death of migrants be lovingly chronicled and disseminated to morally blackmail Europeans into surrendering their nations. Needless to say, any suffering of Europeans at the hands of migrants will be covered up.

The death of migrants isn't a bug in this plan. It's a feature. It's a necessary step to overcome opposition to what is obviously a terrible idea.

True compassion would be to adopt Australia's approach and prevent these waves of refugees from arriving. But then, those who are holding up handwritten signs saying #refugeeswelcome don't actually care about the lives of refugees. The more shallow simply see them as agency free mascots to be used to garner more "likes" on social networking. The more dedicated favor the refugee wave precisely because it will hurt Europe and Europeans.

Either way, don't expect Angela Merkel or the Main Stream Media to take responsibility for all the lives they are destroying. Instead, get ready for plenty of stories from the MSM about how this is really all Your Fault.