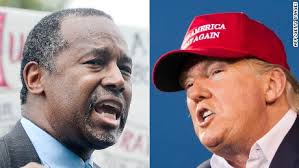 Whipped, cringing, and desperate not to be called mean names, many well-meaning but weak conservatives are rallying to Ben Carson, hoping that their loyalty to a black guy will prove, once and for all, that they are allowed to dissent from the Main Stream Media's Narrative on the issues of the day [Ben Carson takes national lead over Trump in in NYT/CBS poll, by Jon Nolte, Breitbart, October 27, 2015]

There are two problems with this:

Firstly, Carson is not just a "squish" on immigration, but a cheap labor fanatic repeating the same old talking points about immigrants living "in the shadows" and jobs "Americans won't do." Evangelical Christians may cheer Carson's comments against Muslims, but Carson will import enough of them to make the Bible believers irrelevant, so what difference does it make? Trump is just stating to press Carson on the immigration issue, but the Beltway Right has so internalized Leftist racial politics that it may be interpreted as a kind of lese majeste against the good doctor. More importantly, Conservatism Inc. has clearly decided to push Carson as a way to deflate Trump's "outsider" appeal in the same way Alan Keyes was pushed as the useful African-American alternative to Pat Buchanan.

There is good reason to believe Trump would actually do something about immigration, whereas Carson is already making it quite clear he would joint with fellow "conservative" Paul Ryan to pass a cheap labor handout cloaked in Christian piety.

And if you are a member of the Donor Class, getting the rubes to vote for their own dispossession is the name of the game.

Secondly, of course, Carson's campaign is simply a fundraising scam, as it is eagerly burning through its contributors' money on luxury hotels and expensive dinners. This isn't surprising, as Carson is the front man for a team of GOP consultants to do what they do best, prey on gullible conservatives who want to be relieved of their white guilt. A donation to Carson is like buying an indulgence in the Middle Ages. Dr. Carson's smile will forgive you of racism, if not in the eyes of the MSM, at least in your own eyes.

In contrast, Trump has disavowed super PAC's and is not aggressively fundraising. But that's not stopping his supporters.

He may be derided by pundits and mocked by opponents, but GOP presidential candidate Donald Trump has followers so devoted that they’re willing to send him money — even though he never asked for any.

His campaign collected $3.9 million from July to September, according to the Federal Election Commission. And 75 percent of those campaign contributions came in amounts of $200 or less.

That's what a movement that actually might accomplish something looks like, as opposed to a retirement plan for Beltway parasites.

Trump has already paid a heavy economic price for running. But Carson is practically guaranteed a slot on Fox News and a lucrative Bill Clinton style speaking tour after he politely loses to Rubio, or Bush, or Hillary.

And in the end, that's all he and his campaign team wants.