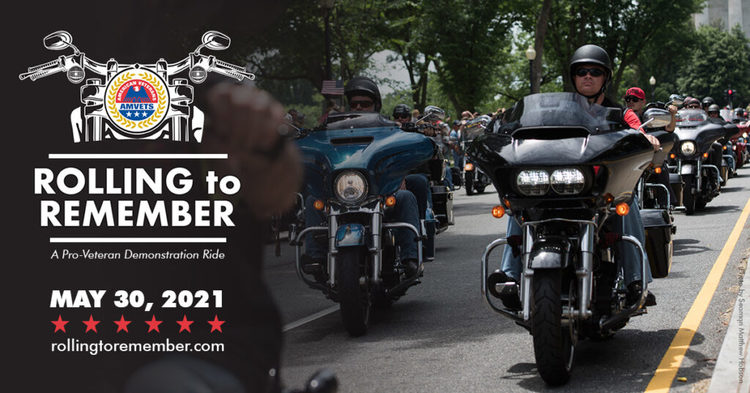 Will Rolling Thunder Happen This Year...Or Will The Biden Administration Shut It Down?

Rolling Thunder is a mass gathering of military veterans riding into Washington DC on their motorcycles. This was an event that went off like clockwork, as regular as the March for Life. It's one of my favorite events when I'm in DC, hearing the roar of the motorcycles and seeing so many people who take pride in their country.

This year, it is being rebranded as Rolling To Remember, which makes it sound less cool but highlights its philanthropic nature. The event will highlight the many risks veterans face, especially suicide. It's hard to think of a worthier cause than helping the people who fought for America and who so often are betrayed by their leaders.

Under President Joe Biden’s leadership, the Pentagon has rejected a permit for the annual Rolling to Remember motorcycle ride that is held in Washington, DC, each Memorial Day to honor POW/MIA veterans.

The event is organized by AMVETS, a veterans group, which submitted permit requests and petitions for the event to multiple federal agencies. According to a press release from Rep. Darrell Issa (R-CA), “AMVETS received approval from the Department of Transportation, the Department of Interior, and multiple other state and local authorities.”

Originally, the Pentagon granted a permit to AMVETS for the event in March, however it was later rescinded without explanation.

“There are no options with as much space and convenient routes to the memorials, meaning it will be more difficult, disruptive, and expensive than if the Pentagon parking lots were available,” said Joe Chenelly, the national executive director of AMVETS.

Nonetheless, I've been seeing a large number of bikers rolling into DC this weekend and I suspect a big turnout, permit or no permit. I note that it's simply the Pentagon which hasn't granted a staging area permit. Washington DC police are still preparing for the event.

Thousands of people on motorcycles will be in the nation’s capital this holiday weekend as part of an annual event to honor those killed in war or missing in action.

​Organizers say participants will begin to gather in a parking lot at RFK Stadium at 7 a.m. Sunday. The demonstration will begin at noon, with motorcycles leaving RFK, then eventually circling much of the Mall before exiting the District via the 14th Street bridge.

Amvets, which is organizing the event, said there won’t be a formal ceremony or gathering on the Mall this year because of the coronavirus pandemic. Organizers say more than 50,000 motorcycles are expected for the event.

[Rolling to Rremember—and Street Closures—coming to D.C. this Memorial Day weekend, by Justin Wm. Moyer, The Washington Post, May 28, 2021]

Interestingly, this article says Rolling Thunder itself stopped receiving enough cooperation from Pentagon officials in 2019 and also faced "increased harassment to our supporters and sponsors." This could be a campaign against them from antifa, journalists (but I repeat myself) or city officials. This could mean trying to get people fired or forcing them to back off from sponsoring the event. Whatever is happening, you won't see much coverage of it in the Main Stream Media.

Name change or not, people are still referring to it as Rolling Thunder on Twitter. And it's important we pay attention to this, because it will be an indication of how the Regime handles conservative-leaning veterans. We'll also get to see DC's approach. Hopefully, they'll treat these veterans better than they did Ashli Babbitt.