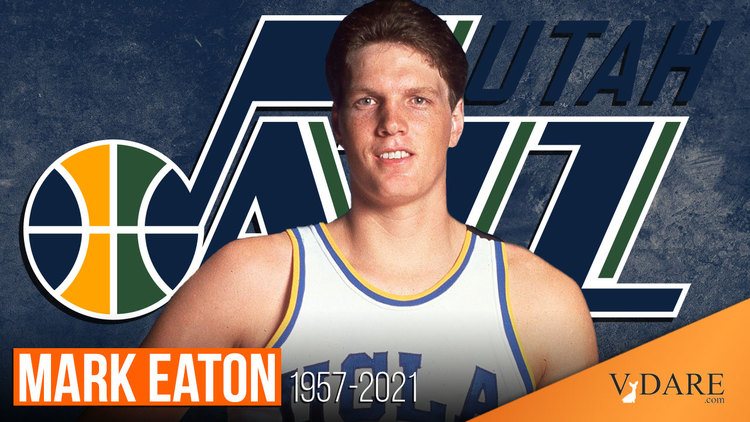 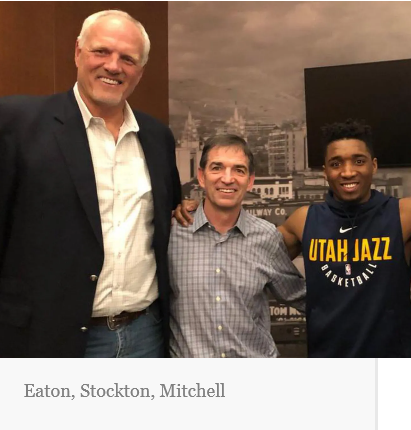 Mark Eaton, one of the more interesting basketball players, has died at 64 while bike-riding near his home in Utah. From the AP:

Mark Eaton, Shot-Blocking Star for the Utah Jazz, Dies at 64

At 7-foot-4, Eaton was a two-time N.B.A. defensive player of the year, and his career shot-blocking average was the best in league history.

I use to watch him come off the bench in blowouts for UCLA. I wrote in VDARE in 2011:

An extreme example of the slow-maturing white guy: 7'4" 290 pound Mark Eaton. At age 24, after having spent three years as an auto mechanic, he was averaging only two minutes per game as the backup center at UCLA because he still looked dorky. But he went on to set a bundle of shot-blocking records for the Utah Jazz.

One day in 1981, I was standing in front of UCLA’s Royce Hall, when I noticed two young men walking toward me across the huge open quad. “Hey!” I said to myself. “There’s something you don’t see very often at UCLA. That tiny fellow talking to the normal-sized guy is a genuine midget.” Then, another young man walked up to the pair. “Wow! Now there’s two midgets with that regular guy,” I thought. “What are the odds of that?”

Highly unlikely, I suddenly realized, as I underwent one of those gestalt snaps, like where the vase in the picture suddenly becomes two faces in profile. Now that there were three people, it became clear to me that the two “midgets” were six-footers and the “normal-sized guy” was 7′-4″ 290-pound Bruin basketball center Mark Eaton (who later became a league-leading shot blocker for the Utah Jazz).

When I think about race, I’m frequently reminded of that lesson I learned in the difficulty of accurately comparing X to Y without a Z to provide perspective. Not many other writers on race seem to have learned it, though, judging by the proliferation of essays comparing blacks to whites with no third race included as a control group.