White Men Not The Problem—Since 1982, Non-Whites 60 Percent More Likely To Be Mass Shooters 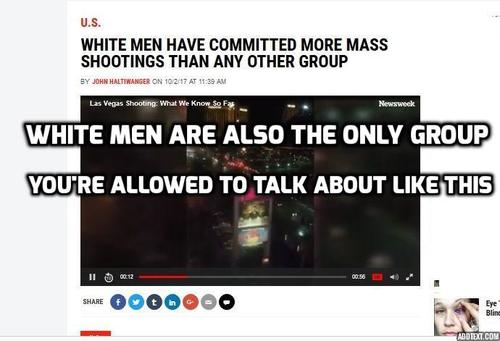 Here's their most basic figure:

Statistics show that since 1982, the majority of mass shootings — 54 percent — were committed by white men, according to data from Mother Jones. Black people were the second largest perpetrators of mass shootings based on ethnic background, but only accounted for roughly 16 percent of the total incidents during the same time period. …

White men are more than 54 percent of the (male) population—about 77% counting white Hispanics. That means they're punching below their weight in mass shootings. (With the exception of the San Bernardino couple, where a Muslim brought his wife to the mass murder, mass shooters are all male.)

Blacks are less than 16 percent of the population—about 12 percent. That means that if they commit 16 percent of the shootings, they're punching above their weight—although not as high as in regular murders. That's just obvious, but Amren.com has crunched the numbers more carefully: