Going back to before the Larry Summers’ whoop-tee-do in 2005, I’ve been pointing out that the three hard science Nobels deserve admiration for not caving in to our culture’s demands for diversity. The media, in contrast, mostly ignored it the demographics of Nobel winners because the prestige of the Nobels might undermine the Narrative.

This year, however, the NobelsSoWhiteMale mindset finally kicked in. For example, from Scientific American:

Once Again, No Female Nobel Winners in Science

Including the zero honored this year, there have been just 17 in the history of the prizes. Why so terribly few? By Christophe André on October 4, 2017

Nearly 2,500 years ago, the Egyptian mathematician and philosopher Hypatia was stoned in public by order of the Bishop of Alexandria.

Teh-Genius Coates has FDR’s redlining 80 years ago as his all-purpose explanation for African American underperformance (such as Coates’ writings), but now we’ve got an even more antiquarian excuse: Hypatia! Of course, Scientific American’s math is off by about 900 years. Hypatia died in 415 A.D, which was 1,602 years ago, not “nearly 2,500 years ago.” (But who can keep BCE and CE straight?) 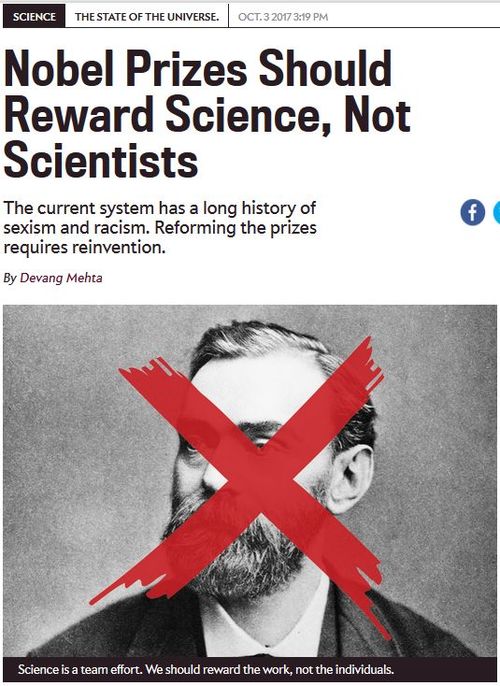 The current system has a long history of sexism and racism. Reforming the prizes requires reinvention.

… This brings me to my second objection: the fact that the prizes have a long history of sexism and racism. Every high-school and undergraduate biology student has heard of Francis Crick and James Watson, the Nobel Prize–winning discoverers of the structure of DNA. How many know that their work was possible only due to data collected by Rosalind Franklin, a more meticulous scientist whose data was shared with the prize-winners without her permission? Franklin was never even nominated for the prize.

Well, she died in spring 1958, more than 4 years before Crick and Watson’s Nobel Prize, and the rules for Nobels say they can’t be posthumous awards. Anyway, I’d say were rapidly approaching the point at which more high school students have heard about Rosalind Franklin as the Real Discoverer of DNA.