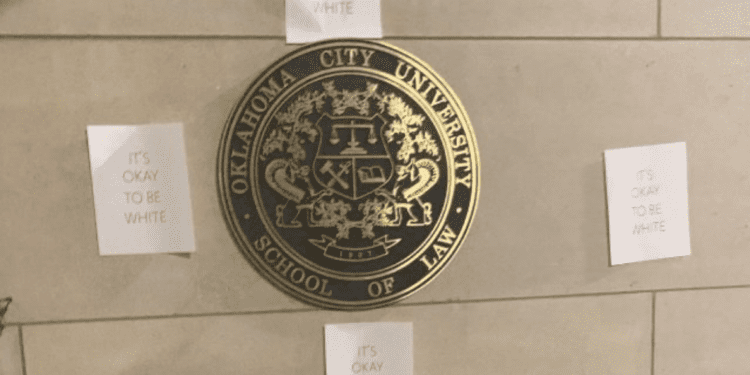 At Oklahoma City University School of Law, it's apparently not OK to be white, as one law student discovered.

Student Expelled After Posting ‘IT’S OKAY TO BE WHITE’ Flyers At Law School
Kudos to the dean for handling a disgusting situation in the most gracious way.

But assuming the law school is state-affiliated, he may have a case for violations of free speech rights.

Also:  how about violations of equal rights?  Hispanic affinity groups poster at will, apparently, as does anyone else but whites.

Otherwise, I think we need to explore suing on grounds of civil rights violations.

Because while free speech is under heavy attack, it's got limits as a defense (private companies aren't covered).  But civil rights are broader, covering both government and private actors.

And if proclaiming "It's OK to be White" is integral to your racial identity, the law school is essentially expelling someone on grounds of their race.  Which is illegal.

So:  you've just been "doxxed" as a Unite the Right/Charlottesville marcher.  Your employer, Avis Car Rental, for example, fires you.  But if you take the step of arguing that you marched as an advocate for your race, instead of merely "because I want to preserve Confederate statues", the "racial" aspect overcomes the "speech" aspect.

It's a way in which taking the step many fear—to overt white advocacy—may provide added legal protection.