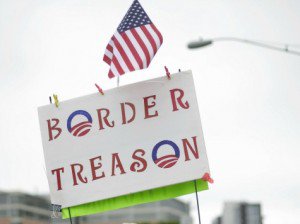 The Obamacrats have evidently decided that the acid test of good border policy is that it should provoke an impeachment. No impeachment = more Administrative Amnesty required.

President Obama will go ahead with a “very significant” executive action on immigration after the summer – a move that may well trigger impeachment proceedings against him, senior Obama adviser Dan Pfeiffer told reporters at a Monitor breakfast Friday.

“The president acting on immigration reform will certainly up the likelihood that [Republicans] would contemplate impeachment at some point,” said Mr. Pfeiffer,

...he neither denied nor confirmed a New York Times account that the White House is considering a plan to accept refugees from Honduras whose applications are processed in that country

And why not Africa?

President Barack Obama insisted for years that he had absolutely no legal authority — none whatsoever, zero, zilch — to slow deportations on a broad scale.

The president is no longer emphasizing his own powerlessness but rather his determination “to fix as much of our immigration system as I can on my own, without Congress.”

Even immigrant rights advocates, who were on the receiving end of the White House denials for years, were surprised by his abrupt and enthusiastic move toward…

The way they talked about it was, ‘There’s nothing we can do, only Congress can solve it, we don’t have the authority,’” said Lorella Praeli, director of advocacy and policy for United We Dream. “That is very different from what they are saying today. It is completely different.”

Prominent Enemy of America Rep Luis Gutierrez apparently told the Morning Joe program yesterday “I think we can get 3 or 4, maybe even 5 million people,” via Executive Action

The correct (and probably the only) way of halting Obama’s George III reenactment is of course impeachment as Peter Brimelow showed in Obama’s Border Dissolution Is Treason. The Answer Is Impeachment. It Would Work. The main reason it might not happen is that the GOP Leadership has been paid off as I suggested in Is Amnesty “Dead” Because Congressional GOP Agreed To Connive At Administrative Amnesty? The rank and file GOP Congresscritters realize this and are terrified:

Rep. Ted Yoho (R-FL) told colleagues that the House should pass legislation with new steps to secure the border, and tell Obama if he didn't implement it, they would impeach him…

“People were hissing at that because they don't want to go there,” said a GOP member who was in the room.

In this lawless situation the Obamacrats are right: the only way to know when it is time to stop looting the store is when the Police eventually show up.

Seems a go0d idea to me.