A week ago, I blogged about the Mayor of Lynn Massachusetts and her struggles to make her city budget work under the strain of hundreds of Central American children (Lynn, Massachusetts, ‘On the Brink’ from Dumped Illegal Alien Kid Costs). She has had to hire new staff to handle foreign kids, many of whom speak neither English nor Spanish, which means fewer resources going to citizen kids.

But no good deed goes unpunished in multicultural society, and Mayor Judith Kennedy was pounced upon by a pro-illegal alien provocateur accusing her of calling the foreigners criminals when in fact the Mayor merely discussed the fiscal problems. (To hear foreign lawbreakers called “criminals” you have to read patriotic blogs.)

The illegal aliens want maximum free stuff, and they want taxpayer-serfs to be submissive when delivering it. 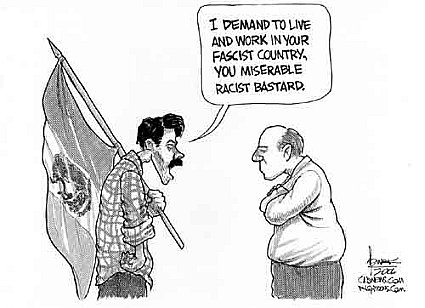 Amazingly, the anti-border boosters whine that the schools insist on keeping out “students” who are actually adults. Certainly local parents don’t want 25-year-old gang-bangers attending school with their teen kids. Safety for all students should be a top priority, but it apparently is not among some.

There was even a demonstration of open-borders complainers against the city government which is trying to make an impossible situation work financially.

LYNN, Mass. — The national debate over an unprecedented wave of Central American young people entering the country illegally is more of a practical challenge in places like Lynn, a former industrial city outside Boston that’s thousands of miles from the U.S.-Mexico border.

There, city officials complain newly arriving Guatemalan children are straining classroom resources, and the mayor and school superintendent have faced criticism for suggesting adult immigrants are posing as teens to attend school.

The surge of unaccompanied minors crossing the border illegally has breathed new life into what has been a long-simmering controversy in Lynn, and the debate is happening in communities around the country as residents and local officials are faced with providing services for the children.

In Michigan, a social service organization’s plan to house child immigrants from Central America in the town of Vassar has prompted multiple demonstrations, which have extracted a toll on the community of about 2,600 about 70 miles northwest of Detroit, said Vassar City Manager Brad Barrett. For example, police have had to add staff on duty during public meetings.

“Everybody has the right to assemble, but it takes additional time and resources,” he said.

In Massachusetts, Lynn Mayor Judith Flanagan Kennedy said the new students have been entering her city’s school system in large numbers for at least two years — 65 from Guatemala in 2012 and another 130 last year — and stretch district resources because they require special attention to address their limited education and English.

“I don’t want to give the impression that we in Lynn are anti-immigrant,” the mayor said in an interview. “This is strictly an issue of economics. … Our budget and our community are going to implode.”

She also has suggested that some of the students look older than they say and shouldn’t be allowed in the public school system, a charge that has drawn national media attention to the city of over 90,000 residents.

The claims are baseless, said immigrant advocates, dozens of whom rallied Tuesday in front of Lynn City Hall to denounce the administration.

The mayor continues to point to an “isolated incident” to support claims that many of the new students are older than their records suggest, said Juan Gonzalez, a local Guatemalan community leader and pastor. “They’re still talking about these two kids from two years ago,” he said.

Kennedy maintained the issue is still prevalent, even as she acknowledged she’s never seen the students in question firsthand.

“This is very much a real problem for me as it is for the people in the border states,” said Kennedy.

Immigrant advocates, though, complain the mayor has been more interested in finding a scapegoat for the city’s budget challenges than real solutions to the district’s growing student population, which also includes resettled refugees and immigrants from other continents.

“These are the sorts of rumors and fear-mongering that, unfortunately, happen up here,” said Jay McManus, director of the Children’s Law Center of Massachusetts. “These kids don’t have anybody defending them. It’s a cheap way to score political points.”

Lynn high school students also disputed the mayor’s assertions. They said the new arrivals are largely isolated from the rest of the school body and, occasionally, subject to teasing.

Lorena Lopez, an 18-year-old junior at Lynn English High School, said she drew on experience to help some of them adjust. Lopez herself crossed the border without her family almost four years ago and has reunited with her mother, an immigrant who has been living for years in Massachusetts illegally.

“The first day in school, I was scared. I didn’t speak any English. The teacher spoke to me and I didn’t understand anything,” Lopez said recently. “It’s a barrier. But it’s not something that can stop you from achieving what you want.”

Besides Lynn, immigrant advocates in New Bedford in southern Massachusetts and Chelsea, another Boston-area city, have reported a steady stream of school-age immigrants from Central America. Precise figures were unavailable, but federal authorities say 773 — the majority from Guatemala, El Salvador and Honduras — had been discharged to family, friends or sponsors in Massachusetts as of June 30.

Gov. Deval Patrick has offered two possible sites to house young people after they are caught crossing the border illegally.

Those children are supposed to remain in holding facilities while they are being processed for deportation, reunification with family or asylum under federal law. But they can also be placed with family or other sponsors elsewhere in the country, pending the outcome of their immigration proceedings.