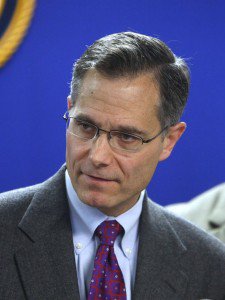 was shot on his front porch in Detroit by two black males after he refused to let them into his house.[Judge called hero in shooting, WZZZ-13, March 6, 2015]

It was definitely the right thing to do not to let them in—the amount of horror than could have been inflicted on Berg and his family by two black males in a home invasion is not to be thought of.

Amusingly, this Detroit News story doesn't describe the men as black, but as "the men, approximately 18-25 years old who apparently tried to rob the federal judge". It also describes the car they escaped in as "either a black Chrysler 300 or Charger". Why is the color of the car relevant?

The Detroit Free Press does describe the shooters as black males, and features this statement from the Judge's wife:

The family of a federal judge who was shot outside his west-side Detroit home Thursday night has a message for the community: Don't blame the city.

"We just want people to know that this is not a reason to hate Detroit," U.S. District Judge Terrence Berg's wife, Anita Sevier, told the Free Press today. "Instead of being angry, be part of the solution for the hopeless teens and children of Detroit."

She stressed, "We don't want this to be a reason to hate."

Sevier's comments came a day after her husband was shot on his front porch in the city's University District at about 9:10 p.m., moments after retrieving his trash bin from the curb.

Berg was appointed by President Obama, so I guess that makes him and his wife Democrats.

I may say, in response to Ms. Sevier's appeal, that my opinion of Detroit has not been changed in any way by this incident.