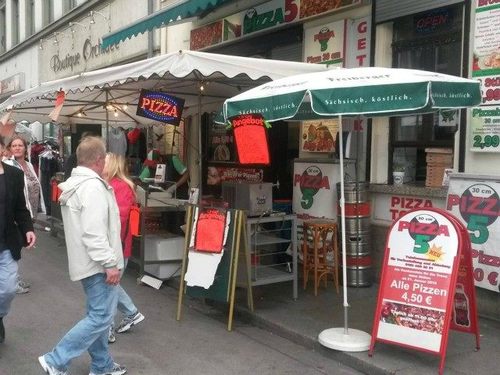 White Anti-Racists Attacked By Minorities—Survivors WON'T Learn, And For The Dead, It's Too Late

A German open borders activist was stabbed by his Muslim pets in one of the more "progressive" districts of Dresden. It's hard to feel too bad for him. After all, this activist is precisely the kind of person who would sneer and snark at German villagers losing their home because the government thinks it's funny to replace them.

Twenty-nine year old ‘Julius G.’ involved himself in political activism while reading his degree in industrial engineering Technical University of Dresden. Now he may have fallen victim to his own politics, as the refugee advocate was attacked while waiting for friends in Dresden’s Neustadt, known as the city’s ‘left wing’, or ‘alternative’ quarter.

Germany’s Bild-Zeitung reports police were called to Pizza 5 on Alaunstraße on Saturday after a group of six to eight men jumped the student in the early hours and stabbed him twice in the back, leaving him in a serious condition. A police spokesman said: “Several police vans searched the surrounding area, unfortunately without success. According to witnesses, the attackers were said to be North Africans”...

The student didn’t think the motivation was robbery, as nothing was taken after the stabbing. Explaining he campaigned for the rights of refugees, he explained: “it makes me very sad that I was attacked by precisely this group”...

Speaking to Saxony’s Sächsische Zeitung newspaper, the unidentified student said he had also campaigned against the Patriotic Europeans Against the Islamisation of Europe movement (PEGIDA), which was founded and maintains its power base in conservative Dresden.

This isn't the first case like this in what used to be the home of the European people. A far left woman was allegedly raped by migrants and was actually ordered to not report the case, lest the Narrative be compromised.

It is claimed she was trapped in a shower block near the camp but loud music meant her cries for help went unheard during the horror attack.

The woman was told not to report the alleged crime by colleagues working for far-left group No Borders, according to reports.

They are said to have told her speaking out would have damaged their cause – to support freedom of movement and oppose migration controls.

Where are the feminists? Probably too busy complaining about some fraternity guy accidentally making eye contact with them or Donald Trump "raping" them through the television.

Much like fake hate crimes on campus and Narrative Collapse, the "liberal mugged by reality" is its own genre of crime. Matthew Yglesias was "randomly" attacked by thugs in both Washington DC and Amsterdam, though he suffered nothing more than some lost money and some bruises. Sometimes, the consequences are far more severe.

For example, Kevin Sutherland was a self described "millennial" who graduated from American University and became a left wing political activist. His Twitter feed is what you would expect.

But then his Twitter feed stops abruptly in early July. This is because he was murdered by one of Obama's Sons, Jasper Spires, who stabbed him 30 or 40 times on the DC metro in front of a horrified crowd. As several noted at the time, the crowd did nothing to help him.

As it was just another "random" black-on-white murder, even the death of a politically connected left wing activist barely registered as a blip in the DC scene. The only time he was mentioned was when his former boss, Democrat Jim Himes, attacked Governor Chris Christie for the "vile" act of using "Kevin’s death to score political points." Christie had used the young man's death as an example of the failure of liberals to prevent crime, and Himes took personal offense  [Congressman to Chris Christie: Stop Using My Intern's Murder for Political Gain, by Amanda Terkel, Huffington Post, July 17, 2015]. Of course, Himes had previously seen no problem in using the corpses of children from Sandy Hook to argue for more gun control [Himes Statement on Gun Violence Prevention, six months after Sandy Hook shooting, Congressman Jim Himes, June 14, 2013]

Sutherland's death was seen as an act of merely private significance for his friends and family, of no larger consequence. To derive a larger meaning would lead to uncomfortable conclusions about the racial realities of crime, and we simply can't have that. Similarly, to promote the attacks of Muslims even on those European traitors who are assisting their invasion might lead some people to question the wisdom of admitting millions of these people into Germany and other nations.

So don't expect these people to wake up any more than Congressman Himes had his own views changed by his own intern being ripped apart in the middle of the nation's Capital. As the stabbing victim in Germany put it,

Despite the apparently random violent attack by the migrants, the activist was adamant the stabbing shouldn’t be used for political ends.

Better for a few left wing activists to die, it is reasoned, than for leftists to have their beliefs challenged by uncomfortable facts.