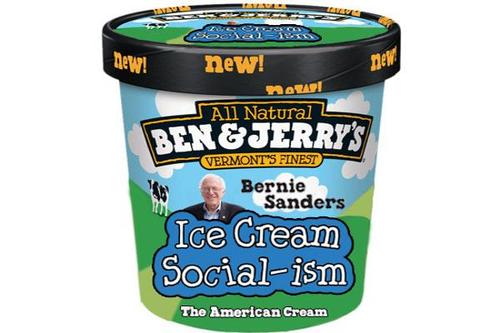 NEW YORK (MainStreet) — Vermont Senator Bernie Sanders has introduced a potent blend of Liberal politics to the Democratic primary race and has earned the endorsement of Ben Cohen, co-founder of Vermont-based Ben & Jerry’s, a subsidiary of Unilever (UL) . But those particular ingredients have formed the inspiration for something else with sure-fire mass political appeal: an ice cream flavor.

If the 74-year-old Democratic Socialist had his own B&J flavor, Cohen told CNN on Monday, it would be called “Bernie’s Yearning” and would feature a large chocolate chip covering only the top of the ice cream.

A friend recommends calling the ice cream flavor dedicated to the the ex-New Yorker Senator from Vermont who dreams of Nordicizing America: White Flight Vanilla Delight.