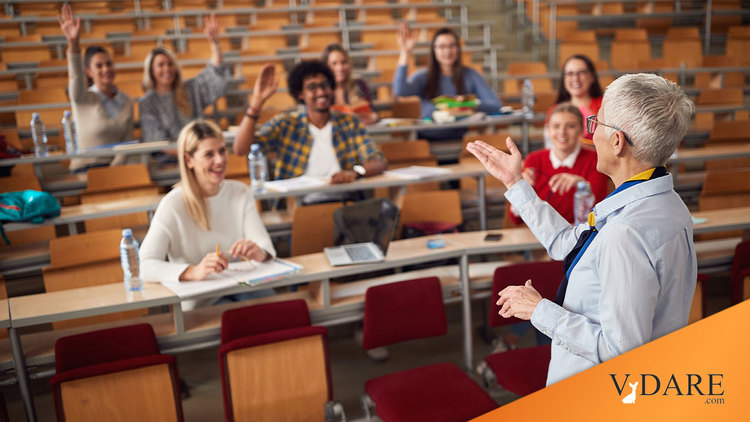 Is The Age Of Informality Ending Due To Diversity?

Tyler Cowen writes at Marginal Revolution about the increasing demands by women professors to be called “Professor” by their students rather than by their first names:

What I expect we will see is that “established” women and minorities will insist on title usage all the more, to command respect, and under the guise of societal feminization we will evolve a new set of non-egalitarian hierarchies, presented and marketed to us under egalitarian pretenses.

An interesting question is whether the women professors who are demanding to be called “Professor” are in hard fields where tech culture is influential and it’s common for professors to become founders or highly paid consultant, or whether they are professors in fields like gender studies that nobody in their right mind who wants to get something hard accomplished would have anything to do with.

Another question is whether the cultural revolution of the Sixties is over and America is going back to more formality and inegalitarianism due to the decline in power of white men with the chops to achieve prestige through their accomplishments.

America has been nominally egalitarian and casual since c. 1968.

The financial success of Silicon Valley has made informal first name culture prestigious.

For example, a guy named John Neilson who worked for me got a job at Microsoft in 1987 and was soon telling me things like, “Bill wants me to go skydiving with him tomorrow.” (Tragically, my friend worked himself to death in 1999 of the same cancer that I barely survived in 1997 due to my lack of career ambitiousness. If he’d lived he might eventually have become CEO of Microsoft. Whenever I lament to my loving wife that I haven’t made us rich, she points out that I’m still around and poor John isn’t.)

Silicon Valley’s egalitarianism preceded even the ex-hippie CEOs like Gates and Steve Jobs. In Tom Wolfe’s 1983 article on Intel, definitely not a hippie company, “The Tinkerings of Roberty Noyce,” he recounts a visit in the 1960s by an East Coast financier in a limousine.

John Carter appointed Noyce general manager of the entire division, Fairchild Semiconductor [the 1960s successor to Shockley Semiconductor and predecessor of Intel], which was suddenly one of the hottest new outfits in the business world. NASA chose Noyce’s integrated circuits for the first computers that astronauts would use on board their spacecraft (in the Gemini program). After that, orders poured in. In ten years Fairchild sales rose from a few thousand dollars a year to $130 million, and the number of employees rose from the original band of elves to twelve thousand. As the general manager, Noyce now had to deal with a matter Shockley had dealt with clumsily and prematurely, namely, new management techniques for this new industry.

One day John Carter came to Mountain Vlew for a close look at Noyce’s semiconductor operation. Carter’s office in Syosset, Long Island, arranged for a limousine and chauffeur to be at his disposal while he was in California. So Carter arrived at the tilt-up concrete building in Mountain Vlew in the back of a black Cadillac limousine with a driver in the front wearing the complete chauffeur’s uniform — the black suit, the white shirt, the black necktie, and the black visored cap. That in itself was enough to turn heads at Fairchild Semiconductor. Nobody had ever seen a limousine and a chauffeur out there before. But that wasn’t what fixed the day in everybody’s memory. It was the fact that the driver stayed out there for almost eight hours, doing nothing. He stayed out there in his uniform, with his visored hat on, in the front seat of the limousine, all day, doing nothing but waiting for a man who was somewhere inside. John Carter was inside having a terrific chief executive officer’s time for himself. He took a tour of the plant, he held conferences, he looked at figures, he nodded with satisfaction, he beamed his urbane Fifty-seventh Street Biggie CEO charm. And the driver sat out there all day engaged in the task of supporting a visored cap with his head. People started leaving their workbenches and going to the front windows just to take a look at this phenomenon. It seemed that bizarre. Here was a serf who did nothing all day but wait outside a door in order to be at the service of the haunches of his master instantly, whenever those haunches and the paunch and the jowls might decide to reappear. It wasn’t merely that this little peek at the New York-style corporate high life was unusual out here in the brown hills of the Santa Clara Valley. It was that it seemed terribly wrong.

A certain instinct Noyce had about this new industry and the people who worked in it began to take on the outlines of a concept. Corporations in the East adopted a feudal approach to organization, without even being aware of it. There were kings and lords, and there were vassals, soldiers, yeomen, and serfs, with layers of protocol and perquisites, such as the car and driver, to symbolize superiority and establish the boundary lines. Back east the CEOs had offices with carved paneling, fake fireplaces, escritoires, bergeres, leather-bound books, and dressing rooms, like a suite in a baronial manor house. Fairchild Semiconductor needed a strict operating structure, particularly in this period of rapid growth, but it did not need a social structure. In fact, nothing could be worse. Noyce realized how much he detested the eastern corporate system of class and status with its endless gradations, topped off by the CEOs and vice-presidents who conducted their daily lives as if they were a corporate court and aristocracy. He rejected the idea of a social hierarchy at Fairchild.

Not only would there be no limousines and chauffeurs, there would not even be any reserved parking places. Work began at eight A.M. for one and all, and it would be first come, first served, in the parking lot, for Noyce, Gordon Moore, Jean Hoerni, and everybody else. “If you come late,” Noyce liked to say, “you just have to park in the back forty.” And there would be no baronial office suites. The glorified warehouse on Charleston Road was divided into work bays and a couple of rows of cramped office cubicles. The cubicles were never improved. The decor remained Glorified Warehouse, and the doors were always open. Half the time Noyce, the chief administrator, was out in the laboratory anyway, wearing his white lab coat. Noyce came to work in a coat and tie. but soon the jacket and the tie were off. and that was fine for any other man in the place too. There were no rules of dress at all, except for some unwritten ones. Dress should be modest, modest in the social as well as the moral sense. At Fairchild there were no hard-worsted double-breasted pinstripe suits and shepherd’s-check neckties. Sharp, elegant, fashionable, or alluring dress was a social blunder. Shabbiness was not a sin. Ostentation was.

By East Coast standards, that was a limo driver’s place and his role. But the Intel engineers were fascinated and appalled by this display of East Coast formality, inegalitarianism, and wastefulness.

When I interviewed at Intel in 1982, they took us on a tour of the headquarters, including the gray fabric cubicle of Robert Noyce, the”Mayor of Silicon Valley” (or perhaps of Gordon Moore, author of “Moore’s Law,” I can’t remember precisely which historic giant). The great man didn’t have an office, he had a cubicle. Granted, it was about 20′ by 30′. And when I lingered behind the tour and stood on my tiptoes to peer in, I saw Monet paintings hanging from the fabric walls. But still, he only had a cubicle …

For example, I started working at a Chicago marketing research startup later in 1982 that was getting ready to do an IPO the next year.

The top executives were always referred to by their first names. The corporate culture was strenuously modeled on Silicon Valley’s culture of informality in order to impress the kind of investors who had made Jobs and Wozniak rich that we were High Tech rather than Corporate America, which paid off the next year when the IPO was a massive success with investors.

(It turned out in the long run, however, that there were crucial differences between Silicon Valley and our customer base of giant corporations. For example, Silicon Valley firms tend to get rich through wielding monopoly power, which the government only occasionally objects to. In contrast, when our chairman arranged a merger in 1987 with our strongest competitor, our clients, who were some of the biggest corporations in the world, went to the government and complained that reducing our industry from 3 to 2 firms would be anti-competitive. So the Reagan Administration struck down the merger on antitrust grounds.)

The marketing research industry was described to me by another CEO in it as one where most of the firms had been “founded by housewives and college professors.” Our firm, in part to contrast ourselves from the dull reputation on Wall Street of our competitors, was distinctly masculine and informal. Thus, the vice-chairman, one of the most distinguished professors of marketing research in the country, was never referred to by his well-deserved honorifics but instead as “Gerry.”

This first name only custom worked well for top executives with moderately unusual first names such as “Gerry,” “Gian,” “George,” “Magid” and “Randy.” But it caused some problems because the top man, the visionary founder/chairman/largest shareholder, was always referred to by employees as “John,” as in, “As John mentioned to me yesterday …”

The problem with this First Name Culture was that there were a lot of people in the company named “John.” Not only was my underling named John and thus always referred to as “John Neilson,” but an executive vice president who had 2000 field workers reporting to him, a truly brilliant manager, was always referred to as “John Johnson.” But if you ever said, “As John mentioned to me …” in reference to John Johnson, that just proved you were a lowly worker who wasn’t on close terms with The One True John (who is an awesome guy, by the way).