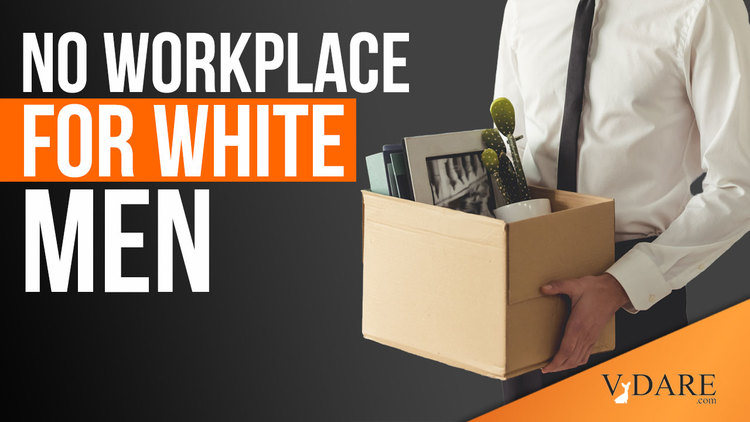 Why not just make it illegal to hire white men? Call it the D.I.E.T. (Diversity, Inclusion, Equity, and Tolerance) Act, and just pass it in both Houses of Congress.

1 in 6 Hiring Managers Have Been Told to Stop Hiring White Men, ResumeBuilder.com, November 5, 2022

Over the past several years, companies big and small have been making public their efforts to improve DEI (diversity, equity, and inclusion) initiatives. As detailed by Glassdoor, many companies have made the connection that DEI is not only good for society, but also good for business.

However, in recent months there has been a buzz around what some are terming “reverse discrimination” in hiring, wherein companies are passing over members of racial and gender majorities in service of meeting DEI benchmarks. And with the Supreme Court again hearing arguments against affirmative action, these same issues continue to be debated across multiple realms.

To find out how many believe “reverse discrimination” is really an issue affecting their workplace, in November ResumeBuilder.com surveyed 1,000 hiring managers across the U.S.

More than half of hiring managers whose companies have DEI initiatives in place ‘somewhat’ (29%) or ‘strongly’ (24%) believe their company practices “reverse discrimination” when it comes to hiring.

Additionally, 48% say they have been told to prioritize diversity over qualifications when considering an applicant.

“In this evolving and competitive workplace, companies are having to respond to the demands of workers, which includes modifying their hiring practices,” commented career expert Stacie Haller.

“With all of the rapid changes organizations need to meet, it’s mostly middle management that implements the policies, and with many organizations, the support and tools provided to them are not there yet, especially when it comes to DEI” she continued.

1 in 6 Have Been Told to Deprioritize Hiring White Men

For example, according to Bloomberg “A lawsuit claims former Google and YouTube recruiter Arne Wilberg was unlawfully fired because he didn’t reject white and Asian male job candidates, which he said the company pressured him and other recruits to do for diversity purposes.”

“Hiring practices regarding diversity are also evolving and workers will notice if companies are treating these practices as simply the means of getting to the desired end,” advised Haller.

Means of getting the desire end? Diversity just means fewer and fewer white people. Pass the D.I.E.T. Act and let’s go ahead to finalizing the goals of diversity, inclusion, equity and tolerance.