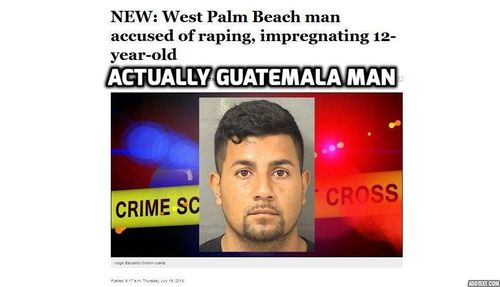 This report of a Guatemalan immigrant engaging in sex with an underage girl is, of course, headlined "West Palm Beach" man, but he's from Guatemala.

A 28-year-old man is facing charges after authorities say he raped and impregnated a 12-year-old late last year.

On Friday, West Palm Beach police arrested Jorge Estuardo Cobon-Juarez on charges of sexual assault on a minor and child cruelty. He is being held in the Palm Beach County jail without the possibility of posting bond.

Cobon-Juarez denied ever inappropriately touching the child. DNA tests, however, indicate he almost certainly is the biological father of the child’s baby.

The age of consent in Florida is 18 years old, according to Florida Statutes. People between the ages of 16 and 17 can give consent to a partner up to the age of 23. Anyone 24 years old or older commits a felony if he or she engages in sexual activity with someone under the age of 18.

Records indicate Cobon-Juarez claimed to have cared for the 12-year-old, though his relationship with her is redacted from an arrest report.

Cobon-Juarez, a Guatemala native and citizen, has been living in West Palm Beach, records show. [More]

This behavior is very typical of Hispanic immigrants. Remember, this is  normal for them--the age of consent in Mexico is 12, and while it's a nominal 18 in Guatemala, the citizens of Guatemala don't obey many laws. Guatemala has child prostitution, and there are "credible reports of forced early marriages in some rural indigenous communities."

If, like successful 2016 Presidential candidate Donald Trump, you read Ann Coulter's Adios America (especially Chapter 11,  "Why Do Hispanic Valedictorians Make the News, but Child Rapists Don't?")  you know this.

You may also remember that it included a chapter  on "Public Warned To Be On Lookout For 'Man'" .