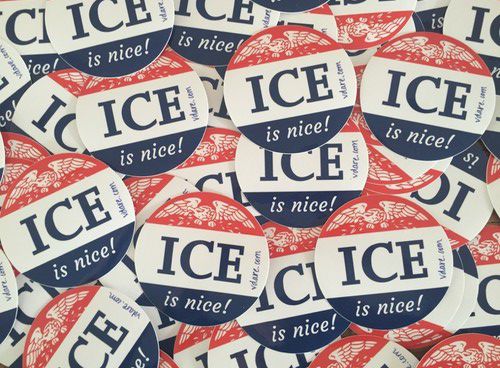 #AbolishIce is not just a hashtag, and its supporters are not looking for a kinder, gentler version of border control. Recently, the Left has escalated its calls for Open Borders by publishing the identities of ICE agents so they and their families can be easily targeted at their homes and places of work. Microsoft groveled after a blog post in which the company hailed their “proud support of ICE” went viral and was compared to “IBM’s work during the Holocaust.” Actress Cynthia Nixon, currently running for governor in New York, along with Kirsten Gillibrand, senator from New York, joined together to call for the abolition of ICE. Nixon even went so far as to call it a “terrorist organization.” Several other politicians have echoed the call.

In Oakland, Open Borders enthusiasts even organized a street protest against a Homeland Security operation aimed at human traffickers of juveniles. These radicals are so obsessed with displacing the historic American nation that they would prefer to protect, rather than prosecute, criminals who traffic kids. Let that sink in.

VDARE.com is not standing by while this radical globalist political movement escalates its demand for the destruction of America. Our writers and analyst spread the word far and wide about the need for lockdown on our Border, enforcement of our laws and protection of America as our forefathers intended, for ourselves and our posterity. Show your support by making a quick contribution and get an American-made “Abolish Open Borders” or “ICE is nice!” heavy duty vinyl sticker shipped right to you.

DONATE TO GET YOUR STICKER NOW

Get your sticker and rock it proudly on your computer, your neighborhood light pole, your car or your window – or wherever you please! Then tell your friends so they can get one too!

Donations of $20 and over will get one sticker

If you want more than 10 stickers, contact me directly at lbrimelow@vdare.com.

We must act now to counter to this growing threat to leave American completely defenseless without ICE. We are hoping to distribute these stickers, reflecting our goal of $40,000 in donations, between now and August 18th, the birthday of our namesake, Virginia Dare. We can all celebrate her 431st birthday by showcasing our stickers in the wild -- ideally plastered directly on top of the Open Borders propoganda that is littering our public spaces!

The funds raised during this time will go directly to covering VDARE.com’s biggest expenses in the coming months – keeping the website up, running and protected from cyber attack, paying our writers and editors for their vital work in spelling out the devastating impact that the #AbolishIce movement could have on our country, and making sure our leaders understand the urgency of this crisis.

VDARE.com supporters know that ICE is a vital part of the defense of our nation. As immigration patriots, we stand for the dignity of the historic American nation and the right of the American people to decide what our country is and isn’t, against the globalist agenda.

And that why we’re fighting to support ICE. Be a part of that work now!