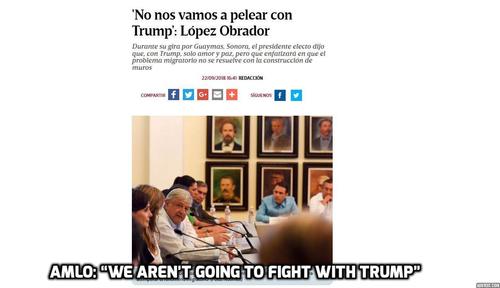 Andres Manuel Lopez Obrador (known by the acronym formed by his initials AMLO) won the Mexican election July 1st, but has a five-month transition period and is scheduled to take office December 1st.

AMLO and Trump are still speaking well of each other.

The president-elect of Mexico, Andres Manuel Lopez Obrador, indicated that he did not desire confrontation with the government of the United States, and that bilateral issues will be dealt with and resolved gradually.

'No nos vamos a pelear con Trump': López Obrador [“We are not going to fight with Trump”: Lopez Obrador] Excelsior, September 22, 2018

That sounds good. I’m all for good relations with Mexico.

AMLO wants “a good relationship to be maintained with the government of the United States”, and that “…we are going to convince them that the migratory problem will not be resolved constructing walls or with the use of force.”

But, when you’re dealing with the U.S.-Mexican border in its current state, and following decades of mass illegal immigration, a wall is really needed and sometimes, yes, force or the threat of it must be used.

Hopefully, once the border is secured and people in Mexico know that, there will be less need to exercise that force. But the willingness to use force must exist.

Back to AMLO’s comments, which he made when touring the city of Guaymas, in the western state of Sonora, on the Sea of Cortez:

We are not going to fight with President Donald Trump. I am seeking a good understanding. I want to convince, I want to explain what our plan is to reduce the migratory phenomenon. I want to put it into practice in our country.

Hopefully AMLO can. But in the meantime, we still have to guard the border.

This should be interesting.