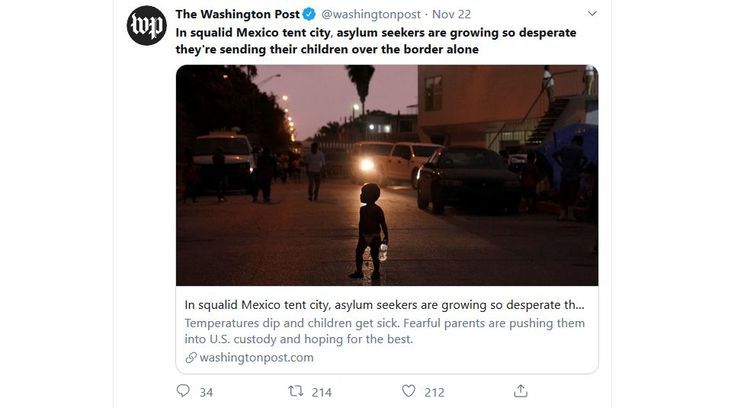 Saturday is a slow day for newspapers, so the Washington Post apparently thought it could throw up some easy Trump-bashing with a sob story about asylum seekers.

The front-page photo featured a lone toddler wandering a cruel Mexican street — say, shouldn’t that child have a parent nearby? Or do the family values of diverse foreigners not extend to minding the kiddies? 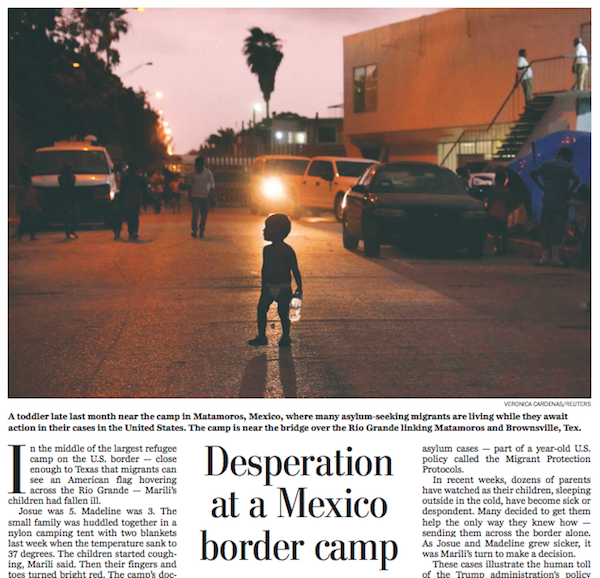 After noting the “sick or despondent” children in the camp of 1600 asylum seekers, the Post blamed the Trump administration’s policies for the suffering.

For some reason, millions in the Third World regard the United States as their personal rescue service, despite America’s primary responsibility to its own citizens. And if the whole family gaggle can’t get accepted in the US, then “concerned” moms send the kids over the border alone — as if raising abandoned foreign children is the American taxpayers’ job.

Fortunately, some help is on the way. As Breitbart reported a few days ago (U.S. Creates Sanctuaries for Migrants in Latin American Countries):

A new regulation will allow U.S. border officers to send asylum seekers to several Latin American countries instead of being released into the United States.

Similarly, the Associated Press wrote: Tougher US asylum policy follows in Europe’s footsteps. No surprise there — Europe has been inundated also. The First World cannot rescue the billions of poor Third Worlders through squishy immigration.

The deal isn’t exactly new news, since President Trump has been working out arrangements with a few Latin American countries including Mexico to accept some of their region’s wanna-be illegal aliens to the United States.

It would be better to end the asylum/refugee scam altogether, since it helps only a tiny fraction of poor people in the Third World. If there were no possibility of rescue in the First World, then millions would demand reform in their home nations which could lead to a better outcome for more people.

But that’s not the political choice being made. In fact, the point of the Post article is that foreign parents are dumping their sick children onto the US taxpayer for expensive healthcare. Many citizens would prefer to see down-on-their-luck Americans get better treatment.

It’s interesting that the most common health problems named were respiratory illnesses — perhaps due to being dragged from Central America to the US border?

The Post story was reprinted by MSN, linked below:

MATAMOROS, Mexico — In the middle of the largest refugee camp on the U.S. border — close enough to Texas that migrants can see an American flag hovering across the Rio Grande — Marili’s children had fallen ill.

Josue was 5. Madeline was 3. The small family was huddled together in a nylon camping tent with two blankets last week when the temperature sank to 37 degrees. The children started coughing, Marili said. Then their fingers and toes turned bright red. The camp’s doctor had begun to see cases of frostbite.

Like most of the roughly 1,600 asylum seekers at the informal camp, Marili and her children had crossed the border into the United States this summer only to be sent back to Mexico to await their asylum cases — part of a year-old U.S. policy called the Migrant Protection Protocols.

In recent weeks, dozens of parents have watched as their children, sleeping outside in the cold, have become sick or despondent. Many decided to get them help the only way they knew how — sending them across the border alone. As Josue and Madeline grew sicker, it was Marili’s turn to make a decision.

These cases illustrate the Trump administration’s policy and suggest the United States, Mexico and the United Nations were unprepared to handle many of the unforeseen consequences.

Marili, fleeing gang violence in Honduras, knew that unaccompanied children were admitted into the United States without enduring the MPP bureaucracy and the months-long wait. The 29-year-old mother — who, like others here, asked not to be identified by her last name, for fear it could affect her asylum case — believed that returning home would be suicide. So she bundled up her children in all of their donated winter clothes and scrawled a letter to U.S. immigration officials on a torn piece of paper.

“My children are very sick and exposed to many risks in Mexico,” she wrote. “I don’t have any other way to get them to safety.”

She pressed the letter into Josue’s hand, she said, and pointed the children to three U.S. Customs and Border Protection agents in the middle of the Gateway International Bridge, the span across the Rio Grande that connects Matamoros to Brownsville, Tex.

“Josue told me, ‘Please don’t send us,’ ” Marili said, crying at the memory. “But as a mother, I knew it was the best decision for them.”

Then she sprinted to the bottom of the bridge and watched through the fence as her children turned themselves in, weeping and wondering when she would see them again, hoping they would find their way to her husband. He had entered the United States and applied for asylum before MPP was implemented. He was allowed to stay. [. . .]

Global Response Management, the Florida-based nonprofit that runs the small medical clinic under the blue tarp, saw a surge in patients, most of them children. The most common cases were respiratory illnesses, said Megan Algeo, the doctor on call at the time. In one case, Algeo said, she persuaded U.S. immigration agents to admit a child for emergency care.