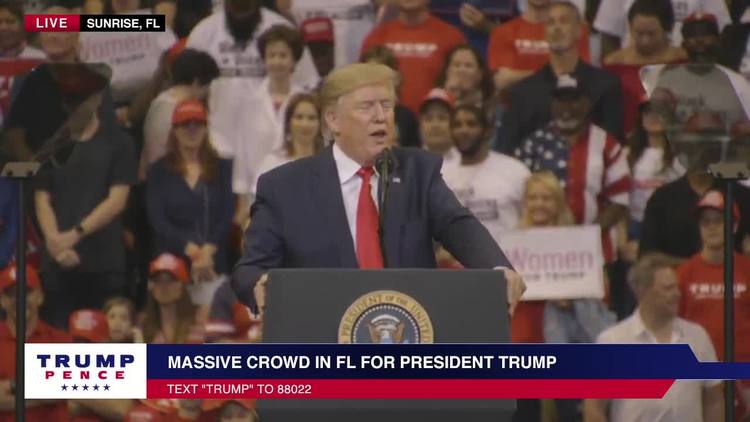 Via FactBa.se, this transcript from Trump's Sunrise, Florida speech, where Trump mentioned the War On Thanksgiving.

Trump made a number of points on immigration, saying things about the Travel Ban, fighting MS-13, deporting Central Americans, and building the Wall. All of that is good, and the crazed Open Borders Democrats, if in office, would stop the Travel Ban, allow illegals to stay, and possibly tear down newly constructed sections of the Wall.

The point Trump occasionally misses is that legal immigration is as bad for America as illegal. To use a Trumpian example, a woman who is raped by a Mexican doesn't feel better if the Mexican has a Green Card in his pocket, and neither does an American who's lost his job to an immigrant feel better to think that the immigrant's visa complies with all applicable laws.

Trump mentions below that he used to talk occasionally about a "big, beautiful door" in an illegal proof Wall, to let qualified legal immigrants in.

There's a reason he "used to" talk about it and stopped. He hears, or doesn't hear, the voice of the people at his rallies.

After years of rebuilding other nations, we are finally rebuilding our nation. It's about time too. We are finally putting America first. Past leaders transform faraway nations into blood-soaked war zones. Then, they demanded that Americans accept unlimited migration from those same terror-afflicted regions.

We don't want to do that. We don't want to do that and we're not doing that. As President, I will not allow our immigration system to be used against us. I will not allow political correctness to put our families in danger and our communities at risk. We won't do it. To protect our people from these great threats abroad, I implemented the travel ban and I just heard today, by the fact is, that the travel ban failed in court.

But it didn't, it won in the Supreme Court. They said it failed and they said that but you know what they meant in an earlier court, it lost. They didn't say that it won in this room. But how is that one? He—he's—they said he lost in court on the travel ban and that's right, in the early court. And then, I lost at the appellate division.

We're doing great on the border. On no issue, have Democrat politicians become more dangerous than immigration. The Democratic Party wants open borders, which is a betrayal of every mother and father who wants deadly drugs to be kept out of their community. They want open borders. I mean, figure this one.

They want sanctuary cities, let the criminals go in. They want open borders, let everybody pour into our country, no matter who they are, and they want one other thing, higher taxes. I don't understand it. You know all my life, I grew up. I'd be watching, and I always had this great interest in politics, fortunately for you.

But I always had this great interest and I'd say, gee, they're going to lower taxes. That's great. That's good. The Democrats want to raise taxes, have open borders, and have sanctuary cities. To me, I don't think that plays about—what the heck do I know? They want to raise your taxes and the threat is to every child whose school is under siege from these horrible gangs that they would allow in like MS-13. We have taken thousands and thousands of MS-13 gang members the hell out of our country and brought them back to where they came from.

In the Republican Party, we believe that all Americans, including millions of wonderful legal immigrants, are entitled to an immigration system that puts their needs first. We want to come first, we want to let people in. You know the big door that I used to talk about. We want a big door but people have to come in legally, and they have to come in through merit. [Very mild sounds of approval on "merit", otherwise silence.]

They have to come through.

But thanks to our tireless efforts to secure the border, Border Patrol, ICE, law enforcement, incredible people, illegal crossings are down 70% since May, and the wall is going up faster than anybody ever would have thought and that wasn't easy getting that wasn't easy. You had a whole party.

The Democrats would not give me anything, any money didn't matter, billions and billions for anything except the wall. Even though five years ago, they all wanted the wall. The only reason they didn't want the wall is because I wanted it, and I made a terrible mistake. I never admit it, they always say I never apologize for a mistake, but I did.