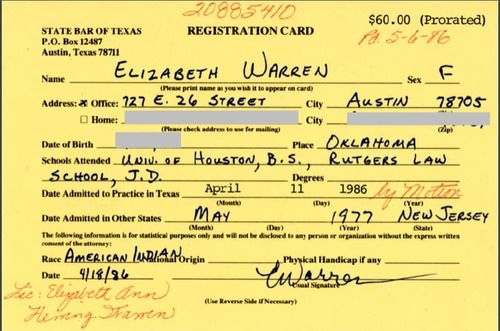 The registration card reproduced above, is from a public records request by the Washington Post.

Warren has been trying for the past year to get past the lingering controversy over her past assertion that she is Native American.

In addition to the DNA test, she released employment documents over the summer to show she didn’t use ethnicity to further her career. And in a speech a year ago she addressed her decision to call herself a Native American, though she didn’t offer the apology that some wanted at the time.

But as Warren undergoes increased scrutiny as a presidential candidate, additional documents could surface to keep the issue alive.

Using an open records request during a general inquiry, for example, The Post obtained Warren’s registration card for the State Bar of Texas, providing a previously undisclosed example of Warren identifying as an “American Indian.”

Warren filled out the card by hand in neat blue ink and signed it. Dated April 1986, it is the first document to surface showing Warren making the claim in her own handwriting. Her office didn’t dispute its authenticity.

No matter how often she claims it didn't help her, it's a bogus claim to be a member of group which receives affirmative action in the legal profession. American Indians are poorer than whites, and score lower on tests. Therefore they get affirmative action.

It doesn't matter whether you think that they need this because they're discriminated against by whites, or have less natural ability for reasons of heredity, neither factor applies to Warren, who has so little Indian ancestry that a geneticist couldn't find it.

Below, she's seen drinking one beer on  video. You don't see Indians doing that:

Actual Indians tend to be either very drunk or very sober. Native Elder Nathan Philiips, for example, claims to not have had a drink for thirty years.

Unlike some of his other claims, I believe that. I also believe that before that time, there were no instances of him having one beer.

Steve Sailer said, discussing Warren's DNA, that "The concept of affirmative action fraud doesn’t really exist in the MSM..." especially since the MSM doesn't want to admit any member of a minority is an Affirmative Action Case.

But an Affirmative Action Case is just what Warren isn't, and she was in effect stealing privileges from the disadvantaged. The spot on the form for race is right next to the spot for disability, if any. For a white person to pretend to be a minority is like faking a disability, it's dishonest and dishonorable.

We are not supposed to think about who exactly qualifies for affirmative action, in part because nobody seems to know the real rules, second because if you think about it, you come to the realization that, Elizabeth Warren aside, white people generally behave pretty honorably over not exploiting ambiguities in quotas for their own benefits (which is why Warren’s opportunism remains a big story).

Warren isn't an Indian who's being discriminated against by BadWhite Donald Trump, she's a white woman who's violated the honor codes of both BadWhites and GoodWhites.