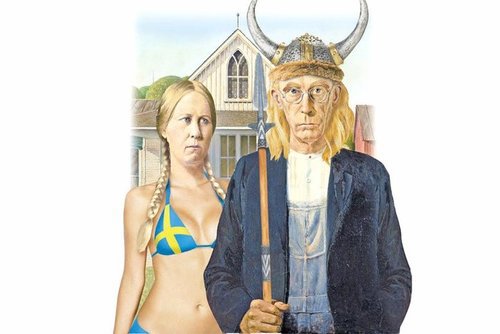 Was Great-Grandpa Totally Wrong About "Nordics"?

In last week’s Radio Derb (of which the full transcript will be archived tonight) I commented on the rather embarrassing—from the globalist-equalist Narrative point of view—preferences of Third Worlders.

If today you live in Sierra Leone or Pakistan or Laos and you want your kids to enjoy a good life, the sensible thing is to get the hell out of there. Find some way to get into Europe, or North America, Australia, or New Zealand—white countries.

If you hope for your kids to live well, you want them living under white supremacy — in a country built by and governed by whites, preferably by northwest Europeans, most preferably by the British.

And that's what people are doing. Everyone's dream worldwide is to live in a country built by and governed by northwest-European whites. You can curl your lip all you like when you say "white supremacy," but the truth is, white supremacy's awfully popular with the wretched of the earth.

Commenter “Jeppo” at Those Who Can See puts a financial-services spin on this theme.

Ironically, we risk everything that makes our societies attractive to the invaders by facilitating their invasion. One of those things is a solid credit rating. Of the 196 sovereign nations in the world, only 16 have an AAA credit rating from at least one of the Big 3 ratings agencies (Standard & Poor's, Moody's, and Fitch). The ones with an asterisk have a Triple-A rating from all three agencies. Fifteen of the eighteen Teutonic nations (83.3 percent) have an AAA rating. The only Teutonic nations not to are Belgium, Iceland and Ireland. Singapore is the only country out of 178 (0.6 percent) in the rest of the world to have a Triple-A rating. But it’s actually even more lopsided than that. Out of 600 million people living in the Teutonic nations, 585 million—97.5 percent—live in a Triple-A country, while only 5.5 million people out of 6.7 billion in the rest of the world live in such a country, or less than 0.1 percent.

Syria, along with a few dozen other basket-case nations throughout the Third World, is considered such a credit risk that none of the Big 3 even assign it a rating. And what is a nation other than the sum of its people? So I don't see how the importation of millions of Syrians and other Third Worlders into the Teutonic nations will be conducive to maintaining our rock-solid credit ratings, though Singapore will probably be OK.

Jeppo’s “Teutonic” needs some qualifying.  “Anglo-Celto-Teutonic” would be better, and even that doesn’t really encompass the Finns, whose ancestry has a significant East Asian component.

Still those comparative numbers are impressive.  As a proxy qualitative measure for rational, consensual government promoting national prosperity and stability in nations populated by persons with a high average sense of civic responsibility, agency credit rating is not bad.

A century ago our great-grandfathers freely deployed the term “Nordic” in much the same sense as Jeppo’s “Teutonic.”  The term soon fell out of favor as being offensive not only to non-Europeans but also to Slavs, Italians, Greeks, Hispanics-Lusitanics, etc.  Then Germany’s National Socialists dropped a major blot on the “Nordic” copybook and the term was completely excluded from polite discourse.

Fair enough; but looking at the world now, a hundred years later, were our great-grandfathers altogether wrong?