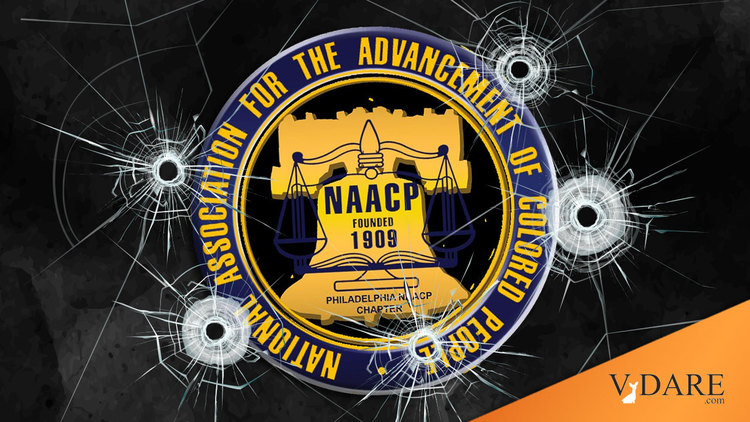 Can one story sum up the insanity of the mandated belief in Black Lives Matter? This one can.

“Shell casings in an office from military grade weapons. An office circled in blood,” said @SenSharifStreet.

“Unfortunately it’s part of the reality that folks in the communities I represent are dealing with.”https://t.co/VukZPAl5To

A Pennsylvania State Senator’s office and the office of the Philadelphia NAACP were struck by gunfire in a shooting in the city’s Nicetown neighborhood Monday night. Police say the shooting left a 25-year-old fighting for his life after being shot multiple times throughout the body on the 4400 block of Germantown Avenue near Windrim Avenue around 11:30 p.m.

Bullet holes surround a “don’t shoot” sign at the Nicetown NAACP office. Several bullets also shattered the windows of state Sen. Shariff Street’s office next door. Evidence of yet another shooting that played out on the streets.

“When I walked up, I saw multiple bullet holes in the reinforced glass. This is glass strong enough that if you were to punch it, you might hurt your hand as opposed to breaking the glass. And these bullet holes ripped right through it,” Street said.

Staffers believe the bullets were from a “high-impact” weapon due to shell casings found inside the office.

Street’s office was closed, as well as the NAACP office, Monday night when police say a 25-year-old male shooting victim was found in the Germantown Avenue area with several gunshot wounds to both legs.

Shell casings littered the crime scene in an area where there’s been an uptick in violence.

“I looked at the window from the inside where the bullets had come in, and I looked at where my receptionist sat, the bullet holes were on either side of where she sat,” Street said.

Street says at least 50% of his staff, including himself, has been impacted by losing loved ones to gun violence, and this is yet another reminder of crime hitting too close to home. He’s advocating for more money to support crisis intervention programs that help stem violence.

Members of the Philadelphia NAACP are also shaken by the remnants of bullets in their office. They say it stirs them to do more to stop the city’s crime wave.

“I’m concerned that these random shootings are just happening more often. This should be a place that people are comfortable with showing up and feel like it’s a safe haven,” Hicks said.

Street drove to his Philadelphia office from Harrisburg overnight to survey the damage. He is back in Harrisburg Tuesday and is shaken, but he’s using the incident to continue pushing forward his efforts for state funding aimed at violence prevention.

Hicks says she is disappointed by the incident but grateful that no one was in the offices at the time. She adds that the NAACP is a “safe haven for people to get help. They should not have to worry about being shot while getting there.”

The shooting is currently being investigated by the Northwest Detective Division.

At a press conference Tuesday night at that same NAACP office, city and local leaders shared their frustration and anger about the scourge of gun violence in Philadelphia, affecting mostly the city’s poor Black communities.

“We are tired out of the same things happening,” Hicks said. “We’re asking for help, but we’re also letting you know that we’re here in solidarity. We are not going to stop doing what we do. The NAACP is here to help.”

As of Dec. 9, nearly 2,200 Philadelphians have been shot — 84% of them were classified as African American — and of the city’s record high and counting 529 homicides this year, 457 died because of gunshot wounds.

“We’re in a state of war in the City of Philadelphia and in many cities across America,” said Bishop Louis J. Felton, the First Vice President of the Philadelphia NAACP. “The United States of America must stand up to the proliferation of guns and a lackluster culture that does not stand up to illegal guns pouring into our community.”

Just as almost every homicide and nonfatal shooting in 2021 Philadelphia has a black suspect, you don’t have to guess who shot up the Philadelphia NAACP headquarters, including leaving the “Don’t Shoot” sign riddled with bullets.