WASHINGTON POST: "What ‘Black Panther’s’ Wakanda Can Teach Us About Africa’s History — and Its Future" 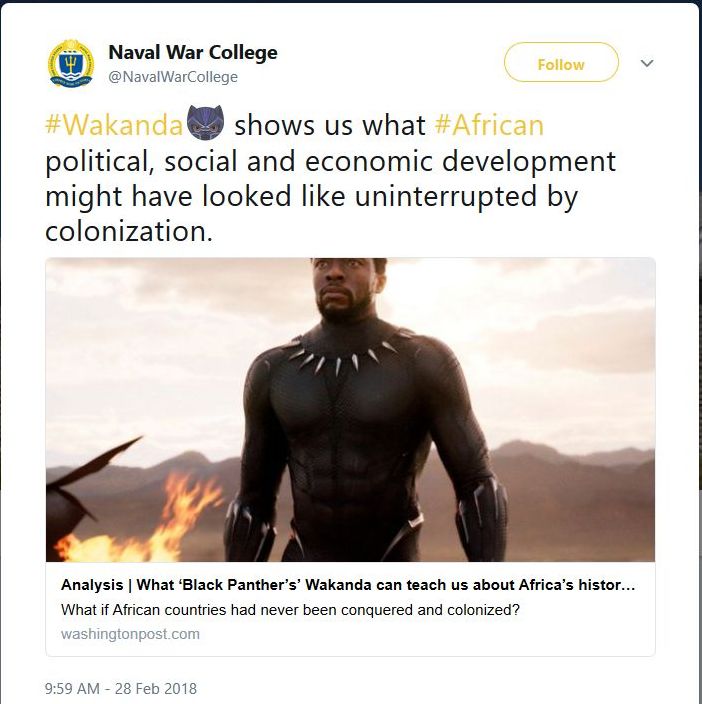 Naunihal Singh is an assistant professor in the National Security Affairs Department at the U.S. Naval War College in Newport, R.I. The opinions expressed are his own and not those of his employer. He is the author of “Seizing Power: The Strategic Logic of Military Coups ” (Johns Hopkins University Press, 2016).

What if African countries had never been conquered and subjected to colonial rule? What if the global slave trade had never stolen 18 million Africans for export to other regions? Africa might look very much like the fictional country of Wakanda, brilliantly brought to life in the new “Black Panther” movie...

Like many professors of African politics, I was most excited to be able to finally “visit” Wakanda, a country I knew well from the Black Panther comic and have mentioned at the start of every introductory class I have taught for more than a decade.

Wakanda’s position as independent, strong, wealthy and peaceful is a very useful way to illustrate how slavery and imperialism harmed Africa over the long term. …

… Many negative associations that people in the West have of Africa — poverty, corruption and conflict — are actually the result of interactions with these same Western countries.

In short, Wakanda functions as counterfactual history. It shows us what African political, social and economic development might have looked like uninterrupted by colonization.

Wakanda also is remarkable for its high level of technological advancement. Here, too, the film echoes themes from real life. Early post-independence leaders saw science and technology as a path to autonomy and respect. Demonstrating proficiency with modern technology was especially important to counter colonial claims that Africans were intellectually inferior and incapable of governing themselves.

For example, in the late 1950s, Ghana’s new government made establishing its own Atomic Energy Commission a high priority; in 1961, it even tried (unsuccessfully) to import a Soviet nuclear reactor to generate electricity and enable scientific experiments...

And who can forget Zambia’s space program?

In addition, brain drain has proved a significant hurdle to post-independence technological advancement in Africa. From the start, many Africans were trained in the West, making it easy for them to take up permanent residence abroad.

… But in some areas, African countries have made great technological strides. For example, most Africans skipped over ever having traditional landlines, making the continent the fastest-growing market for mobile telephones in the world.